Last weekend, I put the final stitches on my “Breath of Spring” embroidery project! It was such a fun and colorful project to work that now I’m sorry I finished it. Working a project that you really enjoy is like reading a good book – you want to get to the end to see the finish, but when you get there, you’re disappointed that the journey is over!

Still, I’m happy the embroidery is finished. Now, it’s just a matter of sewing up the bag (oh dear).

So here’s the whole garden. The embroidery stitches employed in this project were all straightforward, easy stitches. The most difficult stitch was the bullion knot; otherwise, the project is worked predominantly in stem stitch, with lots of French knots (lots and lots of French knots), some blanket stitch, some long-and-short stitch, fly stitch, and straight stitch. That’s about it, actually! The whole project is about 16″ wide. It’s supposed to make up the outside pocket of a large linen tote bag. Everyone who’s seen it, though, seems to think it should be framed, and that it would only get ruined on a tote bag. Racing towards the finish line this weekend, I had heaps of fun embroidering this little guy! He’s a terrific grasshopper. It is, in fact, the bugs that make this garden come alive, I think. Oh, don’t get me wrong – I love the colorful grasses and flowers – but the bugs are the lively element. There’s this fellow, that I already wrote about at length. I love this little guy! Then there are the little ladybugs, worked in fly stitch, satin stitch, straight stitch, and French knots. I never did fix the one with the wonky dots. Should I? Methinks…. I probably won’t. 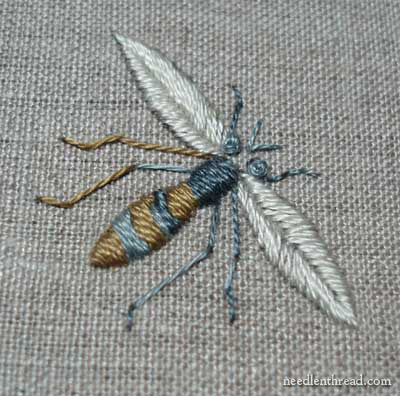 Then there’s the bee, that actually has really widely spaced eyes. I read somewhere (I think it may have been a Snapple fact!) that bees have 5 eyes. Mine just has two eyes, far apart. Then there’s this water-bug mosquito-eater thing. You can tell my entomological skills are rather lacking – I have no idea what this one is. It reminds me of those bugs that I used to see, as a kid, skidding across the top of Parker’s Pond on frong-catching expeditions. It also reminds me of those really big mosquito-looking bugs that aren’t mosquitos that we grew up calling mosquito-eaters, because they were such big mosquitos that we figured they ate small mosquitos. Hm. This splash of brightness is probably the focal point of the garden – it certainly is the first thing you see. It’s worked in a variegated thread, except for the markings, in long and short stitch. This is the svelte side-view butterfly (I do like the white wings on the natural colored linen – they stand out!). And this is the slightly overweight side-view butterfly, with the big head.

So those are the bugs – and here are some of my favorite garden views. I like the combination of the cheery yellow, the bright green, and the blue flowers in this clump of flora. And though it didn’t receive much attention in the blogging of this project, I like the wispy grasses that fill out the garden. I also like my garden from the side. The caterpillar looks ripe and pudgy, and I like all the wavy grasses.

So that’s the project – ’twas great fun. If I can bring myself to tackle the construction of the tote it goes on, I’ll be amazed.

My next project, already underway, is a small goldwork project that I’m giving to my niece as a wedding present. The wedding is in November, but I won’t be there. Still, I’ll send along a little symbolic something in goldwork. I’ll show that to you eventually, but there’s a story behind the piece, so I can’t blog the whole thing right now. I think I can blog snippets, though, that don’t show the whole design. I’ll find out if I can, and if I can… welp. You’ll be the first to know!

Project Update: It ended up on a tote bag!