I have a penchant for historical embroidery, especially when it comes to two categoriest: garments and ecclesiastical work. I journeyed to Clyde, Missouri a while back to see the collection of hand-embroidered vestments on display in the museum at a Benedictine convent. These vestments were embroidered some time between the end of the 1800’s – 1953-ish. I thought I’d share some of the photos they allowed me to take. I think anyone interested in the art of embroidery would find the work somewhat fascinating!

To set the stage, I’ll tell you a bit about the monastery itself before getting into the embroidery. The convent was built in the 1800’s in answer to a request from the Benedictines for some Sisters from Europe to help support the work of the Benedictines in Missouri. Eventually, the nuns established what is called a Convent of Perpetual Adoration, where they kept regular prayer times before the Blessed Sacrament in their chapel. The chapel is stunning. It’s decorated in the Beuronese style of art, which originated in the Abbey of Beuron in Germany. Beuronese art has an interesting history, if you like art history. You can find some information on the history of the Beuronese Murals at Conception Abbey here. Conception Abbey is located just a few miles from the monastery in Clyde. Here’s a photo below of the interior of the chapel – many of the hand embroidered vestments in their museum imitate to an extent the style of art. The decoration seen in this part of the chapel over the main altar is all worked in mosaics. Now, for some hand embroidered vestments. As you look at these, imagine the time, energy, and skill that went into them! For now, we’ll look at the hood of a cope. A cope is a large, cape-like vestment once worn for different functions, including Benediction and also by different clerics during a Pontifical Mass, where a Bishop was presiding. It was also used in the Sung Mass at the beginning during a prayer called the “Asperges Me.” I don’t believe the cope is used often today in any common liturgical function. Even if it is, you probably won’t find too many like this. The scene is the Annunciation, recounted in Luke, Chapter 1 of the Bible, where the Angel Gabriel greets Mary with the news that she is to be the mother of God. Here’s a closer-up of the Blessed Virgin. I think the detail in the hair and at the top of her garments is amazing. Here’s a detail of the background: couched gold, embroidered on top, with black pearls. Here’s a side view, so you can get a glimpse of the color in the wings of the angel. The two capes are quite striking – note the “painted” look of the folded and draped fabric. It’s really pretty! Here’s a close-up on the edge of the wing and on the background, where you can see that the design was embroidered over the gold, in a dark red geometrical pattern. Here’s a close-up of the angel’s face. The stitches get a little blurred, but the face is entirely embroidered in a kind of long-and-short stitch. The halo is couched gold. I’m pretty certain it’s gold jap. 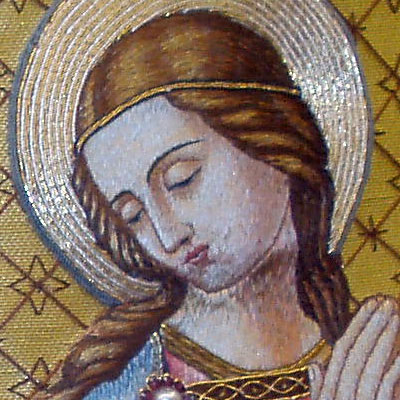 Anyone see a problem with this when you look at it up close? From far away, the bulge on the neck is not as obvious. There is a little discrepancy here in the desire to produce the right shadow, and the actual outcome of the shadow. Again, from far away, it isn’t as obvious. When you look at it up close, though, it looks a little odd. It certainly does not take away from the beauty of the entire piece, and it’s less noticeable depending on the angle of viewing.

So there you have it – a very nice piece of historical needlework. I figure this was worked during the first half of the 1900’s – probably between the 20’s – 40’s. I’m not sure of the date, though, and they didn’t have information available on each specific piece. The last hand-embroidered item in the museum at Clyde is a miter, which was apparently worked in the 1950’s.

Visit the website of the Benedictine Sisters in Clyde, Missouri if you want to read more about them.