The Embroiderers’ Guild in the UK publishes a magazine called Stitch. They have a good website with a lot of information on it, among which are some “sample articles” from Stitch Magazine in PDF format. The one article that caught my eye and set me exploring was the article on the Litany of Loreto Embroideries.

According to the article on the Stitch website about the Litany of Loreto Embroideries (PDF), their history is rather vague. One thing is certain, just by looking at them – they are definitely influenced by the romanticism of the pre-Raphaelites. 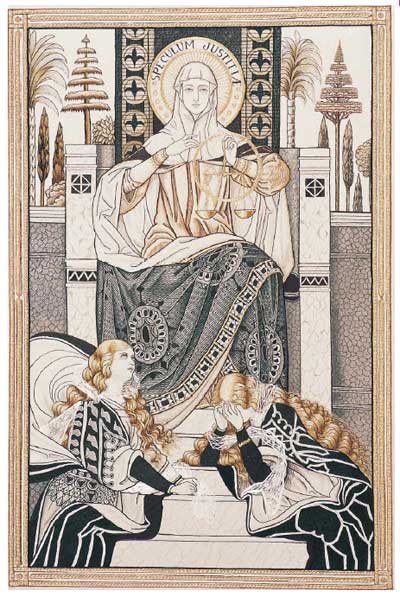 The embroidered panels are worked in long-and-short stitch in muted shades, with metal threads used for accents.

While the style of art reminds me of the pre-Raphaelites, overall, I can’t help comparing the embroideries with the art of William Bouguereau in particular. Take a look: Perhaps it’s just the throne that makes me think of that particular artist – but I think it’s also the motif on the gown in the embroidery and the motif on the throne. The lines in the embroidery are not as “soft” as those in Bouguereau’s painting, but it reminds me of him, nevertheless. It also reminds me of the Beuronese style of art, which I mentioned when speaking of the samples of ecclesiastical embroidery at the Convent in Clyde, MO. The trees in the background and the clean lines are all rather Beuronese-ish. This is another one of the embroideries. In all, there are 12 of the panels. It would have been something to see every title from the Litany of Loreto worked in embroidery – there are around 50. What a project! The Royal School of Needlework sells a pamphlet on the embroideries, if you’re interested in seeing them all.

I have a pretty keen interest in ecclesiastical embroidery, so the article on the Stitch Magazine website was the first to catch my eye. There are other articles on there for the enthusiast – another historical one concentrates on the Bayeux Stitch. The article, Bayeux Stitch Ancient and Modern (PDF), shows the reader how to work the stitch and how it can be interpreted. It’s pretty neat – check it out!

You can find these articles and more at Stitch Magazine online. While you’re there, you might want to check out their projects page, where you’ll find all sorts of inspiring photos of projects, and their stitch page, where you will find illustrations of a heap of embroidery stitches. On their In Focus page, you’ll find a terrific index of the pieces housed at their museum.