One area of embroidery that interests me intensely is ecclesiastical embroidery. For those of you who have been hanging around with me at Needle ‘n Thread for a while, you probably already know that! I got into ecclesiastical embroidery when I was studying for my BA some 20-odd years ago. During a history of art course, I got hooked on the subject, thanks to a book by Pugin that my professor loaned to me.

My Infatuation with Ecclesiastical Embroidery

That book sparked a notorious habit for seeking out examples of ecclesiastical embroidery, visiting museums and sacristies of old churches and secluded convents and taking lots of photos, buying old pieces and studying them, foraging in every corner of the globe (thanks to the internet) for old books on the subject, and pretty much hunting down anything I could get my hands and eyes on that has to do with ecclesiastical embroidery.

It’s been almost a 25 year love affair now with the topic, and I don’t see the infatuation ending any time soon. I am forever learning something new on the subject! 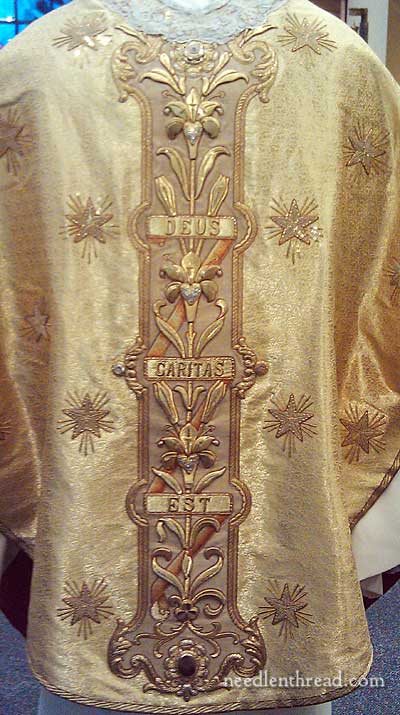 Ecclesiastical embroidery can teach us a lot about the history of needlework, about needlework techniques and materials, about culture, about art, about the connections between spirituality, culture, and art – and the list could go on.

To date, I have over 20,000 photos of ecclesiastical needlework, old and new; I have about 40 books on the subject, published between the mid-1800’s through the mid-1900’s, some that have cost me an arm and two legs (must save one arm for stitching!); I have numerous pieces of old ecclesiastical needlework – from antique fragments, to chasuble backs, to banners and altar frontals, to old altar linens, to entire processional canopies – all beyond use, but excellent for study. I am, in short, a collector and a bit of a junkie on the subject. My friends and family are aware of this fixation, so many of them, when traveling, will take pictures of items of interest that they come across. And that works out pretty well for me!

And that brings me to today’s topic.

Here in the US we have a National Shrine of St. Therese of Liseux, located in the Chicago area. St. Therese, born in 1873 in Lisieux, France, became a contemplative Carmelite nun at a young age (fifteen years old). She led a happy but short life until she died of tuberculosis at the young age of 24.

St. Therese was canonized in 1925 and is a very popular saint throughout the world. With her Little Way of spirituality that helped her find happiness and peace, she is popular with non-Catholics as well. For example, Gretchen Ruben of The Happiness Project quotes her quite a bit.

St. Therese enjoyed a connection with textiles in her own life. Her mother ran a very successful lace-making business in Alençon, France, which supported the Martin family until Mrs. Martin’s death (of cancer) when she was 45, and when Therese (her youngest daughter) was not quite five years old. On display at the shrine in Darien, Illinois are some beautiful goldwork vestments that were commissioned in honor of St. Therese by Pope Pius XI, who canonized her. A friend recently visiting the shrine sent along photos of the vestments, which I thought I’d share with you. The techniques involved in creating the vestments are interesting and worth seeing!

The first picture in this article is the front of the St. Therese Chasuble in the museum at the shrine. The chasuble is made from cloth of gold, and the “pillar” on the front and the cross on the back are made from an ivory colored velvet, intricately worked over with goldwork embroidery. The velvet is from the dress Therese wore when she entered the Carmelite convent. The lace at the neck of the chasuble, which you can see in the photo just above, is from the veil Therese wore that day.

The chasuble is interesting for two other reasons:

First, the center medallion on the back of the chasuble is an image of St. Therese painted on silk. This combination of embroidery with a painted medallion or accents on the back of a chasuble is seen more and more frequently from the late 1800’s through the mid 1900’s and beyond. It’s not a combination I like, personally, but I understand why it was done. Already well past the throes of the Industrial Revolution, we became used to “quick.” Painting is much faster than hand stitching this type of portraiture. And as this type of painting became more prevalent, a kind of trend was born. Second, the chasuble is also interesting because it displays, in goldwork, some text on both the front and the back. The text on the front reads (in Latin), “God is Love.” The back reads (from Proverbs 9:4 of the Latin Vulgate) “Let whosoever is a little one come to me.” It is not as common to see text on vestments, though that’s not to say it was never done. I think this is a nice example of text on church vestments. Here, you can see one of the goldwork lilies on the back of the chasuble, on the ivory velvet ground. The lily is stitched in a gold wire thread over cut card shapes, to create very high relief goldwork. This vestment above is called a stole, and it belongs to the same set as the chasuble above. Here, we see again a combination of painting and embroidery.

On one side of the stole is featured the Sacred Heart of Jesus and on the other side of the stole is featured the Immaculate Heart of Mary. These two symbols were quite precious to Therese, so it is not surprising to find them somewhere on “her” vestments. The background behind the hearts is painted and then, over the paint, we see radiating lines, which are made from pairs of silver passing thread, couched. The hearts are made out of cloth of gold, and are appliquéd on top of padding, to create dimension. The padding is probably carpet felt or something similar.

Around the heart appliqué is a gold cord outline, and on the outside of that, a darker outline in brown silk. The thorns on the heart are embroidered in what looks like a heavier silk twist, in satin stitch, the flames are worked with couched threads and outlined in red, and the cross is also worked in couched passing threads.

Above, you can see some of the roses from the circlet around each of the hearts. These are worked with couched threads in the center (each center is divided in three sections) and the petals are worked in gold wire thread over card, with an outline of silk worked around them.

Other Pieces of the in the Goldwork Vestment Set Above, you can see the burse (which is a folder-like piece that holds a small altar linen) that belongs to the same set. The background inside the central design is the same ivory velvet, with high relief goldwork around it. The lily at the top of the central design is also made of the same velvet, appliquéd, and so are the two buds on the side of the design. This piece is called the chalice veil. It’s made of the same matching cloth of gold, with the velvet background in the embroidered area, as well as the velvet lilies, and small velvet stars on the corners. Here’s a close-up on one of the velvet lilies. The veins in the middle of the petals on the center lily are created by small spangles and “s-ing”. Finally, the set includes this incredible goldwork banner, also worked on cloth of gold. It is a magnificent example of goldwork in relief. You can really see the effect of the gold worked over high relief card on the corner designs and on the lettering. I really love this technique! It is rarely covered in goldwork books, or if it is, it is barely touched on and then passed over quickly. (I’ll be showing you some of high relief goldwork up close in a future article, where I’ll get inside the goldwork and show you what’s there.)

At the top of the banner, in the circle, is a star made from the same ivory velvet that shows up in each piece of the set.

In the center of the large cross in the middle of the banner are four white pearls. Here’s a close up on that high relief goldwork on a lower corner of the banner. Really exquisite!

I hope you enjoyed seeing this example of exquisite goldwork! I always figure there’s something to learn from church embroidery, whether there’s an interest in the religious nature of the pieces or not.

Tomorrow, speaking of goldwork, I’ll show you something related to the topic that you may not have seen yet, and the next day, Thread Talk!

Leave a Reply to Candice from Barcelona Cancel reply