Here’s the latest major embroidery project I’ve got underway. I thought I’d share it with you while I work against a six-week deadline. All other embroidery endeavors will most likely cease in the next six weeks, as this one is rather time consuming!

This project is for the back of a vestment, so it would fall under the category of “church embroidery” or ecclesiastical embroidery. The image is the Agnus Dei, or Lamb of God. Traditionally, the Lamb, as a symbol of Christ, is portrayed with a white banner with a red cross on it, standing on a hill or grass, generally with some flowers at the feet. The background is the sky at morning, although the motif is sometimes worked on a gold background, or simply on blue fabric. There is often a “fountain” of blood, symbolizing the slain Lamb shedding his blood for the salvation of the world.

So my first step in this project was to work up the design. I did this first in a sketch book, then on graph paper, finally transferring it to tracing paper several times until I got it where I wanted it. Then I layed in some color to get a color scheme. The design is placed within a quatrefoil shape.

Once I had my design where I wanted it, I pricked along all the lines with a handy piercing tool (you can find these at Nordic Needle). An alternative is a needle stuck in a cork (which makes it easier to hold). Then I prepared my fabric and mounted it on stretcher bars: 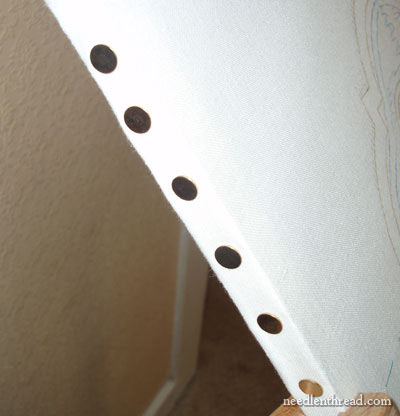 This is the “next best” option for setting up a project (the best being a slate frame, which is virtually impossible to be found in the US right now). The concept is that you stretch your fabric and pin it with tacks. This is easily done with the right tools, like the EZ Tack It kit from Lacis. Once the fabric was mounted, I pounced the design on with a pouncing tool and pounce powder. I should have taken pictures of the process, but I forgot – next time!

After pouncing, “connected the dots” of the pounce with watercolors, using a very fine paint brush. 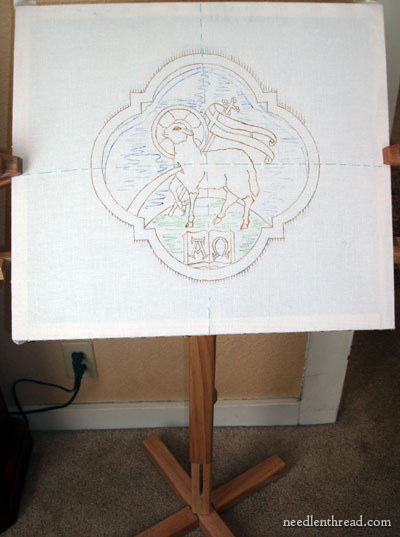 So here it is, on the frame which is mounted on a stand. The design is 11″ x 11″ at the farthest points of the quatrefoil. Here’s a close up. I have a few adjustments to make in the design as I go – for example, the banner’s not quite right on the top line. It needs to curve in more. I’ll adjust that when I do the sky. This is the grass going in. I’m using stem stitch, not long and short stitch. Since I’m working horizontally in many patches of different greens, it makes more sense to use stem stitch. You can see the variations in color here. For thread, I’m using silk – Au Ver a Soie, Soie d’Alger, one strand. I ordered it from Twining Thread, where they carry the whole range of colors and the service is great, and the prices either the same or about 5 cents less per skein than other places. You can see the patches of color being worked. Once the background grass is finished, I’ll work in tufts of grass in different greens, as well as clusters of flowers. (That’ll be the fun part!)

The next step after the grass is the sky, which will be worked in long strands of flat silk in different blues, and then couched over with gold, in the old “Italian Stitch” style. You can see what that looks like here.

For fabric on this project, I’m using Legacy Linen – Alba Maxima, which is a relatively high count, evenweave linen, with about 40 threads per inch. It’s great stuff! I purchased it through Twining Thread as well.

So, this is what’s keeping me occupied for the next six weeks! I’ll keep you posted with pictures, etc., as I progress.