I was scrolling through my files of photos I’ve taken of different pieces of ecclesiastical embroidery and came across these photos of a chasuble embroidered with the Last Supper and other images. So I thought I’d share them with you.

The chasuble itself is not embroidered – the motifs (as is often the case) were originally embroidered on separate pieces then appliqued together and fitted onto a chasuble. This whole piece looks to me like a bit of a salvage job: I think the embroidered cross and bands were probably on a different vestment originally. The vestment itself was probably too worn for church use, so the embroidery was salvaged and put onto a different chasuble.

The embroidered part is probably not old, though. I would say it’s no older than the early – mid 1900’s. The gold is certainly worked in imitation Japanese gold.

Apology in advance: these are not my clearest photos! I didn’t have my new camera when I took them. The image of the Last Supper is on the back of the chasuble, centered in the cross section of the cross. Below the Last Supper is an embroidered image of Melchisedech, the high priest in the Old Testement. The allusion is to Christ, the High Priest, “after the order of Melchisedech.” Here you can see both images positioned on the chasuble. I guess I couldn’t get in the whole cross. There is a motif below Melchisedech as well:

The Pelican is used as well as an image of Christ, as it was thought that the pelican would feed its young from its own flesh.

And some close ups (as best as I could get them) from a few of the scenes on the back of the chasuble: The shading on these is nice. They’re about 2″ square. 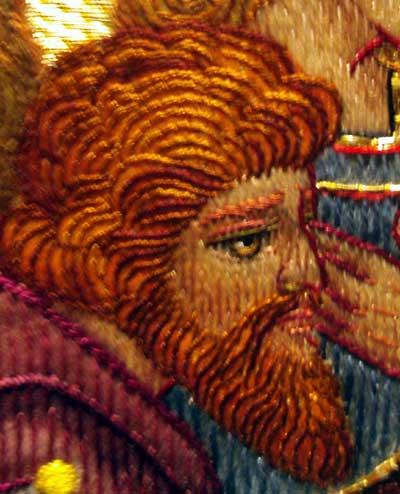 A close-up of one of the apostles – note the detail in the eye. Even though the photo’s a bit blurry, the eye really is amazingly detailed. Two other apostles. I always find it funny, when you look at these pieces up close, how strange the eyebrows look! On the front of the chasuble is the sacrifice of Isaac, another image from the Old Testament.

Above the sacrifice of Isaac is this little embroidered angel. I like it. I like the way the lifted wing fits in the arch! And below the sacrifice of Isaac is the image of a ram, also an allusion to sacrifice.

And here’s a close up of another one of the decorative medallions. Nice satin stitch! And here’s a relative close up of one of the acanthus-type designs that set off the arches around the figures. Really, the padded satin stitching is exquisite.

Imagine – just imagine! – the work that went into these pieces. I’d love to re-create something similar to this… maybe not the same theme, but on the same scale! How many years do you suppose it would take one person to manange that? !!!