I’m not exactly a bug fan, though I do like to look up close at some of the stranger buggy creatures inhabiting God’s earth. Caterpillars have always been fascinating to me – and this one, sitting atop his embroidered leaf, content in all his bullion-knot-pudginess, is quite appealing, as far as caterpillars go.

I’ve managed to add a few more stitches to my Breath of Spring project – and among them is this little fellow. He cracks me up. After I stitched him, I was pretty pleased, though some of the bullions are a bit wonky in the middle. But he is just too cute. I love his little legs.

His body is made up of bullion knots in alternating yellow and red, and his head is satin stitched in black, with French knots for the (rather large) eyes. His legs are little black straight stitches. 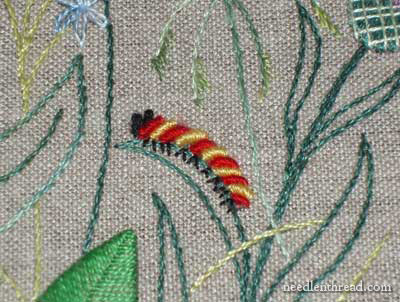 I was observing with pleasure his colorful addition to the garden, when my sister stopped in. After expressing her approval, she told me a story. You see, my sister is a kitchen-garden-fresh-food-and-veggies fanatic, and each year, she plants an elaborate kitchen garden. To keep fresh herbs handy for cooking, she has a line of small clear vases on her kitchen counter, in which she places bundles of fresh parsley, basil, and whatnot from the garden.

She noticed a small caterpillar on some of her inside parsley one day, but decided to leave it there to see what it would do. While I pictured caterpillars in her soup, she continued to tell me how the thing, over several days, molted, then molted again, getting bigger, changing colors, and on and on.

The very day of her visit, she had been working at the sink when her gaze fell on her vase of parsley. It was moving and shaking! Low ‘n behold, the caterpillar (which had originally been the size of a tiny inch worm and now was progressing towards finger-sized) was wriggling about in great consternation. Then – bam!

It’s skin popped off and hit the counter! (I don’t really mind my inanimate caterpillar…)

Within a short time, it had worked itself into a kind of question-mark shape, and had formed around itself a chrysalis – the recognizable chrysalis of a swallowtail butterfly. I thought that was pretty neat.

I know my caterpillar can’t compare with the swallowtail that will eventually emerge on the salad on my sister’s counter – and in fact, unless the colors run, my caterpillar won’t morph into anything else…

…but I still think, as caterpillars go, he’s pretty swell.