A couple weeks ago, I took my Mom to a small cross stitch shop here in Kansas. She was looking for some kind of magnetic something-or-other to mark her filet lace crochet patterns, and I was happy to oblige her with the journey – I’m always in the mood for a needlework shop, after all! While we were there, I came across an interesting “tool” that captured my interest, so I bought it, thinking (if it does what it says) it would be an interesting tool to share with you.

But as it turns out, I am majorly perplexed by this needlework tool. Maybe someone out there can enlighten me on its value! This is what it is: “thread straightener” rods, for silk or synthetic threads that are kinky, curly, etc.

Now, in concept, I am not opposed to a tool that would easily assist in relaxing the kinks out of silk threads. I, too, have been befuddled and frustrated by silk threads that are so boingy that they are a pain to use.

So I was more than willing to give this little miracle tool set a try. These are two four-inch plexi-glass or pastic dowels, with a purple rubbery foam cushion hugging the middle of the dowels. The purple stuff feels a lot like the stuff that’s used on the outside of drink bottles to insulate them. 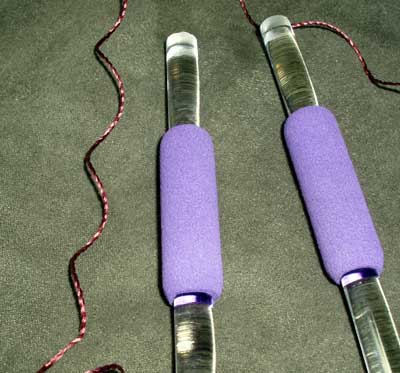 According to the directions, you’re supposed to wrap the cut ends of each thread around the purple foam center, and gently pull until you feel the thread relax. This is supposed to remove kinks, curls, etc.

For my first attempt, I took out some curly silk that was wound on a small, narrow spool, so it was a bit out the curly-bouncy side. I wrapped only the cut ends (about an inch or an inch and a half) around the purple stuff, one end to each dowel. And I pulled gently.

What I felt was the cut ends sinking into the foam center on the dowels. I didn’t “feel” the thread relax. ??!! And the thread didn’t look any different when I removed the ends from the dowels, except that the ends were a bit staticky.

Then I looked at the instructions again, and I thought that perhaps they really meant that, starting from each cut end of the thread, I was to wrap the thread all the way around the purple foam, into the center of the thread, so that the thread was wound onto the dowels, and then I was supposed to pull gently, pulling the thread off the dowels. So I tried that, too, and ended up with a staticky mess of curly silk thread. I’m assuming my second interpretation of the directions was entirely incorrect – curly-boingy thread is one thing. Staticky-curly-boingy thread is another matter entirely, and practically impossible to stitch with.

Yes, I’m stumped. This isn’t exactly my idea of a useful needlework tool. But perhaps I’ve got the whole thing figured wrong, and there’s some way to make this $5 set of 4-inch plastic sticks useful? Any clues?

A tried and true method for relaxing kinked, curly, or bouncy silk thread: Take the whole bundle (assuming it’s coming off a skein) and cut it to your preferred length for stitching. Then put the tea kettle on. Once it starts whistling, hold your bundle of threads in both hands, and pull gently on it while running it through the steam from the kettle. In this way, you’ve relaxed your whole bundle of threads in one go. Then fix yourself a cup of tea and let your threads dry out. You can also use Thread Heaven on particularly cantankerous threads, to good effect.