Last week, we had a give-away here on Needle ‘n Thread for this pair of red Bohin embroidery scissors. They’re functional, they’re sharp, they cut well, they’re nicely weighted, and… they’re Red. What more could a person want?!

Today, I’ll announce the winner and tell you about a special something that’s coming up next week that, if you any interest in historical embroidery, you won’t want to miss! 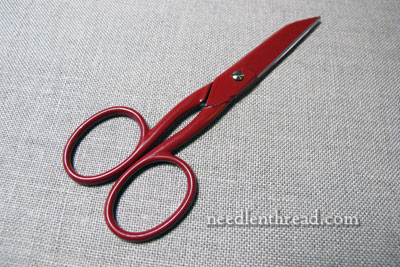 Errr… rather, the winner of the red scissors.

The question was something along the lines of “What do you look for in embroidery scissors?” I enjoyed reading the answers as they came in – most of you echo my own thoughts! Functionality and quality come first, aesthetic appeal is a bonus, and I budget for anything that’s remotely pricey (i.e. over $10 – which most good scissors are!).

The winner – drawn randomly – is lacysuzette, who answered the question thusly:

Functionality! Just wish I could convince some manufacturers to “gussy up” their superb scissors. OR–convince other manufacturers to make their cute ones do a better job! Price is usually not a consideration. I don’t collect scissors either, but seem to have acquired some for “show” & some for “go” over the years. Is it just me or are the red Bohin scissors more similar in size to embroidery scissors used in the 1940′s & 1950′s??

Yes, you’re right about the scissor size, Suzette – they are not the tiny scissors we see today. They remind me very much of that vintage ’50’s style of anything (like toasters and blenders and such). I think that’s one reason I really like them!

Congratulations, Suzette – please drop me a line with your mailing address and I’ll get these red beauts off to you!

For Lovers of Historical Embroidery

The next give-away on Needle ‘n Thread (next week) is a book – now, a “rare” book, as it is out of print. It’s called English Embroidery from the Metropolitan Museum of Art, 1580-1700: ‘Twixt Art & Nature, and you can read a little bit about it here. The book is a scholarly one exploring the role of textiles and embroidery in history, especially this particular historical period of 1580-1700. It’s full of magnificent images of the pieces of 17th century embroidery that were on exhibit at the Metropolitan Museum of Art in 2009.

Hedgehog Handworks has a small batch of the books available – the last batch! – and she’s donating one for a give-away here. So next week, I’ll be running that give-away, and for those who don’t have the book but are interested in historical embroidery and would like to have it, this will be a good chance to add it to your library.

So, look for that next week!