Good morning and Happy Friday all around!

Today, I’m going to share with you a little Stitch Fun! tutorial for a decorative composite band, worked on a foundation of wheatear stitch.

This band can be used for lines, gentle curves and the like. I’ve used it on letters (in Stitch Sampler Alphabet) and I’ve used it for decorative borders or just little pretty accent sprigs. It’s an easy and fun combination! So, the foundation for this decorative band is the wheatear stitch, which is a chain stitch variation with little off-shooting arms that create the look of a wheatear. Hence, the name of the stitch.

If you’re unfamiliar with the wheatear stitch, you’ll find a video tutorial for wheatear stitch right here. It’s pretty simple and a good stitch to add to your repertoire.

In this tutorial, I’m using coton a broder #25 for the thread with a #7 crewel needle, and I’m working on linen fabric. You can use practically any type of embroidery thread for this. If you’re playing with regular stranded cotton (DMC floss), use two or three strands from the six. This will work well in finer perle cottons as well, like #8 or #12. For this particular interpretations, three colors work well. To get things going, stitch up a line of wheatear stitch in a color of your choice. Take the needle to the back of the fabric inside the first chain stitch above. Come to the front again in the third chain stitch down the line, and then take the needle to the back inside the second chain stitch, right where you first emerged to start backstitching. Continue backstitching down the center of the chain stitches until you’ve backstitched the whole line. Simple! 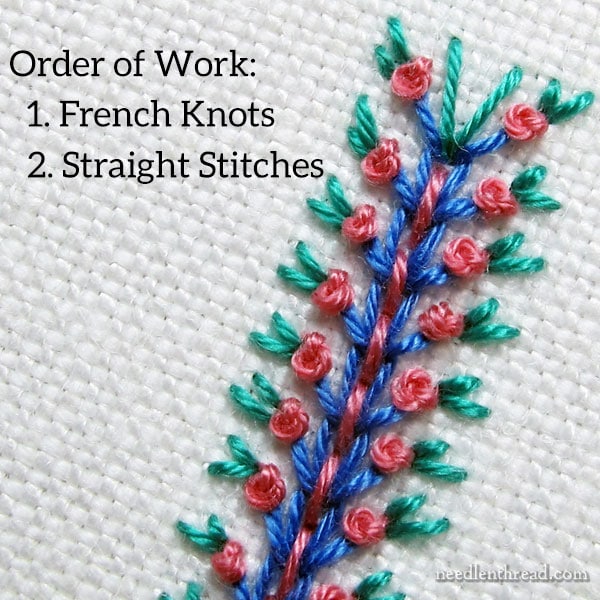 Now it’s just a matter of a little further embellishment!

Using the same color you backstitched with, work tiny French knots at the tip of each wheatear “arm.”

As you can see, it’s a very simple but effective way to create a really pretty composite decorative band! Here are some samples of this embellished wheatear banned, used on lettering in Stitch Sampler Alphabet, my e-book for decorative lettering made up of over 65 stitches and stitch combinations.

There are all kinds of ways you can vary the look of the band, besides just changing colors. If you play around with it a bit, you’ll find yourself exploring all kinds of different combinations. But be careful – that kind of exploration can be addicting!

So maybe this weekend, if you’re in the mood to play with stitches, you’ll come up with your own favorite combination? If you do, feel free to tell us about it!

I hope you have fun with it!

I’m back home, much earlier than originally planned! It’s great to be back in Kansas! I had a terrific little break. I met my six sisters on the east coast and we spent several days together, often just hanging out in a lovely spot overlooking the ocean. The fascination of staring at the ocean, listening to its song and watching its fluctuating moods, is a vacation in itself.

So, why home early? As it worked out, there was too much pressure to get back to work. I suppose this is what happens when you’re self employed and there’s no one to pick up the slack when you need to take a break.

More specifically, I rushed home because, immediately before I left, I signed a lease on a new studio space. A small space within walking distance of my house came open two days before I was scheduled to leave. I’ve been looking for a space for a while, knowing that Needle ‘n Thread would not survive as a business unless I could grow it in a new direction or two. Even though it’s not my “dream space,” with the lack of affordable small spots around here, I figured I better jump on it, so I signed in blood. And now it’s a sink or swim thing. I decided I better get home and start swimming!

I’m very excited about things I have planned, which will take shape over the coming months. I’ll definitely show you the space as the work areas come together, and I’ll keep you in the loop as my plans develop.

Hope you have a terrific weekend with your needle and thread!