Happy Monday! Did you enjoy much time with your needle and thread this weekend?

As it turns out, I didn’t. I managed to squeeze in a little bit of stitching time late Sunday afternoon – and it didn’t last very long!

But I almost finished the five motifs that are featured in Elizabetta’s booklet In a Wheat Field that I reviewed a couple weeks ago.

I made some changes as I went along. I’ll show you and explain my reasoning… In the hoop are the little bluebell flowers from the book. I think they’re sweet, but as I worked them, I thought of other ways I might present the same type of flowers.

I changed the colors, using the same blues I used for the cornflowers. I also changed the green, combining two colors of green for the stems and leaves. The biggest change I made on any of the flowers, though, was with these white Marguerite daisies.

The white would work great on a natural colored linen, where it would stand out more. But I’m using white linen, so the white really didn’t stand out as I would have liked.

Also, the bullions (which called for two strands) were rather heavy and awkward looking in such a small space. If I were going to stick with bullion loops on that flower, I’d reduce to one strand.

But, since the white wasn’t working for me, I decided to change the flower altogether.

And what could be more appropriate when you live in Kansas, but to change it to our little native weedy “sunflowers” – which are not to be confused with the huge seed-producing sunflowers that also grow here as a crop. The sunflower I had in mind is the common sunflower, which grows wild and weedy on pretty much every roadside in Kansas during the summer. 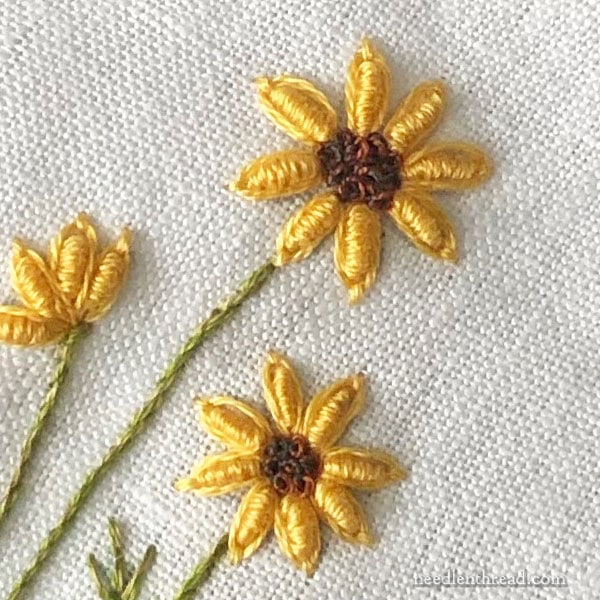 And like I said, these flowers are everywhere around here. They are why the sunflower is our state flower.

In any case, I switched to a golden yellow for the petals, stitching one bullion (with one strand of floss) per petal, surrounded by a daisy stitch. For the center, I used a mix of brown and dark grey (one strand of each in the needle) for the French knots. I also switched greens, using a combination of two greens in the needle at once.

I wasn’t as tidy as I could have been with the center on the main flower, but overall, I was pleased with the sunfloweriness of the outcome! The whole thing just suddenly felt like home!

So those were my stitching adventures of the weekend, and it wasn’t very much, was it?

I hope your week is off to a grand start!

In a Wheat Field Availability

I’ve heard that both Needle in a Haystack and The French Needle sold out of their first round of the books and have ordered more, so if you’re looking for the book in the US, you’ll find them there.

In Australia, All Threads Embroidery is carrying the book, and Create in Stitch is carrying a limited number, which sold out quickly, but they are ordering more, so you can get in on their next order now.