When I started this 2021 year-long sampler project on January 1st, I had no idea where it was going.

And you’ll be happy to know that, in honor of All Things Random, I still have no idea where it’s going.

Even though it’s been a while since I shared an update, you’ll see that the sampler hasn’t moved along too far! On many days, I only put in a few stitches.

I’d get my morning podcast going (I’m listening to The Bible in a Year podcast, which is what I gauge my “sampler time” by), and while I was listening, I’d think about what to do next.

But you know what? That never works! Despite today’s over-infatuation with the notion of “multi-tasking,” the fact is, the human brain cannot attend to more than one thing at a time. So if you’re giving attention to one thing, you can’t actually give attention to the other. That’s just the way the brain works.

Often, I’d stop stitching because I was paying attention to what I was listening to, and I didn’t want to pause to make any decisions. And then I realized I really wasn’t making any progress at all. 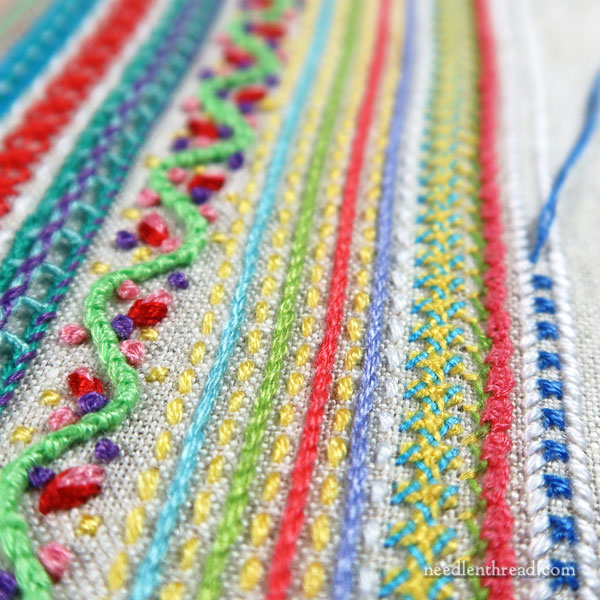 So, eventually, I gave up and started doing completely mindless, I-don’t-have-to-make-any-decision-type-stitching, and I ended up with multiple rows of stem stitch alternating with running stitch. The colors I had on hand had to do with Easter, so a whole chunk of the sampler ended up being a repetitious Easter sequence.

But that’s ok! I can look at that and remember why it looks like that, and when I stitched it. It’s a marker, of sorts. Then I got back to the habit of thinking ahead (before hitting the play button) for a little while, and ended up with a row of interlaced herringbone that took forever to stitch – which was nice, because then I didn’t to think again until the row was finished!

I used cotton floche for the interlaced herringbone. If you’re not familiar with cotton floche, this article will tell you all about this lovely thread!

I worked the stitch Really Small – which is another reason it took forever. This was probably a dumb decision, not just because of the time involved, but also because it was so small and fiddly that it took away from the pleasure of working the stitch.

Are you familiar with interlaced herringbone? I love this band stitch, but to be really effective, I think it should be worked somewhat larger, with a more defined thread.

It’s the yellow and blue bit with the arrow pointing to it in the photo above.

To the right of that is a scalloped buttonholed chain stitch, also in floche. If you’re looking for a really pretty stitch, check out the tutorial for this one! There are so many ways you can add to this stitch to make all kinds of beautiful variations.

Anyway, at that point, I stopped thinking again, and ended up with a couple rows of opposing half-cross stitches in white, and then in between them, I’m currently adding some regular cross stitches in blue. And that’s as far as I’ve gotten! I happened to snap the photo above on a gray day, with no real intention of using it on the blog, but alas, it’s the only photo I’ve taken of the whole piece to this point. The color is not quite right… at all!

Incidentally, I have a little less than 3/4ths of the fabric strip available for the rest of the year, so that’s another bonus to working slower!

If I were re-doing this project from the very beginning – which is not part of the plan at all – there are definitely some changes I’d make, especially when it comes to fabric.

I chose the fabric I’m using because I had a strip of it right on hand, and I didn’t really think too hard about it. It’s a lovely linen! But now that I realize I’m tending more towards line stitching, in retrospect, I’d have chosen something with a more prominent weave (a lower thread count), just to make it easier on the eyes.

We’ll chat a little more about this point later, when I show you some linen “scraps” that have Huge Possibilities for future amusement.

If you want to read more about this project, you can find all the articles dedicated to this particular sampler project under Stitch Fun 2021 here on Needle ‘n Thread.