Let’s do something a wee bit different today, shall we?

Normally, when we explore stitches together, I launch right in and show you the stitch and how I do it. You can see examples of this approach all the way through the Stitch Fun series that you’ll find here – lots of stitches to explore there!

Today, though, let’s take this in a different direction. I’m going to challenge you to work the stitch from a set of old instructions, and then I’ll show you my explorations with it in the next article, with some reflections and ideas and whatnot. My curiosity was piqued. I get a lot of questions about embroidery stitches, but rarely do I get two almost identical questions about the same stitch from the same old book within a month or so of each other.

I went to the book – which is Embroidery Stitches by Mary Wilkinson, published in 1912, and available for free download here on Internet Archive.

The book is a hand-drawn stitch dictionary of an impressive number of stitches, many of which are… well. I’m not sure what to call them! They are not necessarily what we’d refer to as specific stitches, as much as they are arrangements that have been given stitch names.

Take, for example, the Circle Stitch, which you’ll find on pages 34-35: The description of this “stitch” is “a back stitch used for ornamental circles, conventional flower centers, or for attaching ornamental buttons.”

And there you have it. The circle stitch! Or… the backstitch, worked in a circle.

The illustration isn’t quite a back stitch as we know it, if you consider the backstitch as forming a continuous line of touching stitches.

But a “back stitch” doesn’t necessarily have to touch the stitch before it. It just has to be worked back while still moving in a forward direction. For example, I often tack my starting threads with tiny back stitches worked on a line towards my starting point. These aren’t touching stitches. But they’re still “back” stitches, as opposed to the backstitch.

In any case, it looks like a running stitch. She calls it a back stitch. It’s worked in a circle. So she named it “Circle Stitch.”

With the multiplication of books over the years, with the more concentrated efforts in schooling in stitchery, with the “codification” of stitches, and with a growing interest in the preservation of the art of stitching, stitch names have been honed down and “commonized” so that, when English speaking embroiderers refer to, say, “detached chain stitch,” we pretty much all have a good idea of what that means.

But this wasn’t necessarily always the case. In Wilkinson’s book, there is no “detached chain stitch.” It is called “loop stitch.” It’s only referred to as “chain stitch” when it’s worked in a chain of many loops.

There’s an entry in her book for “Chrysanthemum Stitch,” incidentally – which is simply the “loop stitch” worked in longer loops in the configuration of a chrysanthemum. But it’s still the loop stitch – or what we would call detached chain stitch, or, casually, daisy stitch. Or the “lazy daisy,” even.

On pages 110-111, she lists a stitch called “leaf stitch,” which is not at all what we know today as leaf stitch. It is, in fact… loop stitch again! Only this time, she says “similar to loop stitch [it’s the same!]. It may be used for small leaves, as a grounding, or for ornamental motifs, as in the illustration.” But it’s the same as her loop stitch, or detached chain, just as it is illustrated.

The book is rather entertaining in this regard, and you’ll find a lot of interesting configurations of stitches in it, all given their very own stitch names, which can be fun to read!

But onto the stitch challenge… 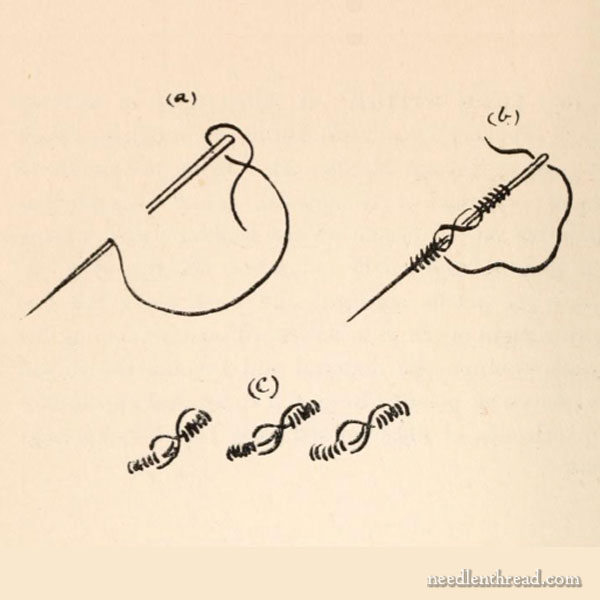 In her book, Wilkinson offers the stitch illustrated above as “Trilby Stitch.”

Her instructions for the stitch, which you will find on pages 186-187 read:

Now, before I undertook playing with the stitch, I read that over several times, to make sense of it. I had some trouble reading that over and picturing the whole sequence in my mind, coming out the way it does, so…

… I thought about it.

Maybe the name is supposed to give us some kind of hint about the stitch? A trilby is a hat.

Nope. I can see no connection between the stitch as it is illustrated and a trilby (hat).

I doubled checked to make sure that her illustrations throughout the book are consistent – that she shows what should be the finished configuration of the stitch, worked. She does, in practically every single illustration.

So it stands to reason that, with this stitch, she intends the outcome to look like the final drawn element on the lower right of her illustration, since this would be the normal reading progression through that drawing. They are not entirely. I wrap before re-inserting. Hers looks like the set up for a very small bullion knot.

And so, with all these little pieces in my mind, and with her illustration in front of me, I should be able to work through the written instructions while following her illustrations and come up with the stitch configuration of that final element in the lower right of her drawing.

I set about trying.

And that, my friends, is your stitch challenge!

If you have a chance and a scrap of fabric, give it a try!

When exploring stitches for the first time, it’s easier if you use something like a perle cotton rather than stranded floss, and if you explore BIG at first (while you get the movement down). Then reduce it if you want to, by changing the weight of your thread and the spacing in the stitch.

I explored with perle cotton #5 and a milliner needle (when you have to wrap a thread many times around a needle, a milliner is a good choice). I also tried it with stranded cotton, using all six strands and then just three strands, to scale results.

On Friday, we’ll chat a little bit more about this one, and I’ll show you the results of my explorations.

Have fun with it!

(“Forgive me a cruel chuckle,” as Prince John would say…)