Previously, I mentioned that we’re using iron-on patterns for my embroidery classes this summer. Actually, I’m beginning to re-think that! Ironing on a repeat pattern can be a bit of a hassle! Still, it worked, so I thought I’d show you how I did it.

The first embroidery project that I mentioned using an iron-on pattern was the monogrammed linen guest towel. Putting the pattern on the guest towel as a pretty simply endeavor – it was just one letter, after all.

But I wanted to iron on a repeat patter, to decorate the edge of a kitchen towel. So I contemplated how to line things up and get the pattern on the towel in such a way that the design – a straight line of flower-like motifs – began and ended with the same figure. This is the pattern – it begins with the 8-pointed spoke, and ends with the four-petaled flower thing. If you transfer it once, then repeat it, your beginning motif and ending motif won’t be the same… you could flip the pattern, but then you’ll end up with two of the same figures in the middle. So that’s something I had to take into consideration.

I knew that the design had to be centered, and that it had to be lined up with the base of the towel. To mark the center of the towel and the line along which to transfer the pattern, I thought about using a pencil. However, I didn’t want to risk leaving a residue that might not disappear, especially considering that the heat from the iron might set the pencil marks. I also thought about a water-soluble pen, but this presented the same problem – you shouldn’t iron over water-soluble ink, because it sets with the heat.

Soooooo. This is what I did. First, I laid the towel out to measure it and to check how the repeat pattern would fit. I figured it would take two patterns, plus one of the single motifs. Then I measured up my towel and prepared to mark it.

Instead of using anything that leaves an actual mark on the fabric, I decided to use a little bone folding tool. These are tools that are usually sold in the paper crafts area of craft stores. They’re used to score paper to make a folding line. Alternately, you can use a piece of sanded, smooth wood with a tip on it, or a burnisher used in other art forms, or probably even the back of a kitchen knife (not the serrated edge!). I lined up the towel on a straight edge, then measured up a couple inches, where I wanted the top of my design to be. In measuring, I noticed that the fabric was not exactly cut on the grain. It’s just slightly off. I was tempted to follow the grain of the fabric, but that would’ve made the design slightly crooked. So I measured from the base of the hemline on the towel and kept the line even.

I used a ruler as a guide, and drew the bone paper scoring tool firmly across the line which would mark the top of the design. This left a definite crease in the fabric. Then I measured the center point, and used the same tool to mark the center of the towel. Now I had my positioning marks in place, without using anything that actually marked the fabric. After this, I took my pattern and carefully measured it, marking on the back side (the un-inked side) a quarter inch line. This is what I used to line up the design with the mark on the towel. I pinned the iron-on transfer ink-side down onto the towel in the correct position. Pinning the pattern is essential for ironing on a repeat embroidery design! If you eyeball it without pinning it, and you apply the iron, you risk not getting a transfer and having to re-apply the iron-on, which is virtually impossible. Whenever I’m ironing anything for embroidery, I always use an old pillow case underneath the piece. The instructions recommend putting something over your ironing board cover, anyway, in case the ink bleeds through.

So I applied the iron to the back side of the pattern for about 10 seconds, as prescribed in the instructions in the iron-on transfer book. When you do this, it’s important to place the iron directly on the transfer, apply firm pressure, and don’t move the iron back and forth.

And this is what I got for the first transfer: The picture is partly blurry (out of focus), but so is the design on the fabric. The ink, especially with the first transfer, seemed to fuzz out a bit – not actually bleed in an irreparable way, but just “spread” in a kind of fuzzy way. This may very well be the quality of the transfer. I did not notice anything like this on the monogram.

Anyway, after you’ve held the iron on for the prescribed amount of time, unpin one corner of your design and check the transfer. You want to make certain it transfers! And if you take the pattern off, and only part of the design transferred, you’re pretty much sunk, as it’s really hard – if not impossible – to place the design in the exact same spot. And if you don’t, you end up with duplicate lines (like double vision!). Now it’s time to line up the next repeat. By the way, I suggest using pins with a steel head or a glass head, because it is likely the iron will have to rest on the pins.

With the second application of the transfer, you will need to hold the iron on a bit longer. You can see that the transfer is not nearly as dark the second time. But I prefer it like this! It’s visible enough to embroider over, but not dark enough (and the lines aren’t wide enough) to worry about not being able to cover it up.

Still, part of the repeat didn’t transfer, so I applied the iron for a few more seconds – and I ended up with a sort-of dark pattern in some areas. Now there’s the question of the “balance” of the design. I wanted the whole line to begin and end with the same figure, the 8-spoke little design. So I cut my transfer, and isolated that one figure. I measured the distance from the center of the flower to the center of the spoke design, and lined up the isolated piece. 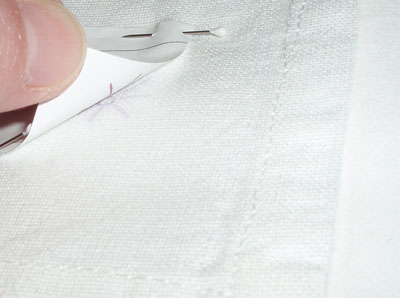 And I ironed it and checked it – very pale on the third application, but that’s ok! I like it that way. So I left it.

In some of the books I was using, they suggest placing aluminum foil under your fabric before ironing on a used transfer, to increase the strength of the pattern. I don’t know if this technique works – I should try it! – and I don’t know if it’s applicable to just a certain type of iron-on pattern. If anyone’s tried that, I’d love to hear about how it works! So that’s the extra motif…

And that’s the center of the towel. You can definitely see the difference between the first transfer and the second!

The whole process was somewhat time consuming, but not that bad, actually. If I were doing a stack of towels, I’d do each step at the same time on all the towels, then move on to the next step. That might speed the process up!

If you have any input or advice on ironing on a pattern, or a repeat, do share!