Casalguidi is an embroidery technique, rather than just a stitch. It consists of very heavy raised stem stitch worked in curves, lines, squiggles, or what-have-you (whatever the design dictates), usually with a lighter background of pulled thread stitching. Casalguidi is usually a whitework embroidery technique, but the technique can be easily adapted to your surface embroidery, wherever you want a high-relief, textured line that tends to be somewhat heavy. It can be easily incorporated into stumpwork embroidery projects, too.

For today’s Stitch Play, as a follow-up to yesterday’s raised stem stitch, we’re going to look at Casalguidi, and hopefully, you’ll find lots of potential for this technique, at the various stages in the stitching. This is what we’re going to create: To work the Casalguidi stitch here, I’m using #5 perle cotton, which I think is a bit heavy for this technique. A finer thread can be packed closer, resulting in a smoother finish overall. But the perle cotton serves to show off the technique, and I have to admit, I do like the texture in this sample! I began with a thick bundle of fine strings twisted into a kind of soft rope. You can use whatever type of string you have about – you can even bunch together a thickness of embroidery floss, if you want. But since I have an abundance of this stuff (not sure what it’s called, exactly!), I tend to use it for padding under raised stitching. (In fact, later on, I’ll show you how to manipulate this kind of padding to achieve both thick and thin areas from the same bunch of string… but more on that down the road!) 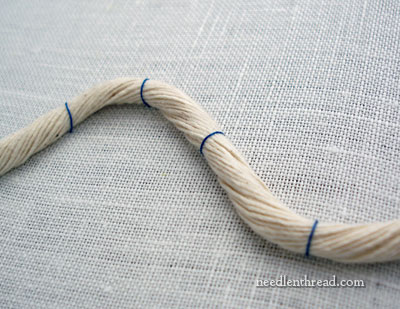 Using sewing thread, I loosely couched the string in the shape I wanted it. I used a contrasting color of thread here so that you can see the development of the technique – when you do this, use a thread that matches your padding. I’m going to use perle cotton at each stage of this sample, but I’ll change the colors so that you can see each stage clearly as the piece develops. The first layer of stitching is simply an “overcast” stitch or a satin stitch straight over the string. The stitches should be perpendicular to the path you’re following (dictated by the string). I started a little way from the beginning of the string padding, worked back to the beginning, and then went back to my starting point and continued down the string. You can see that the satin stitches are close together, just touching shoulders, but not tightly crowded or overlapping. This layer of stitches is pulled relatively tight over the string. I continued down the line of string, covering it with satin stitches. This happens to be a variegated thread, so you can see a striped effect beginning to develop. As you come to a curve, you have to “fan” the satin stitches a little bit, so that they take the curve gracefully. In the photo above, you’re looking at the back of the bunch of string. You can see that my next stitch on this side of the string (the top of the satin stitch) is not right up against the previous satin stitch. However, on the front side of the string (the side I’m facing as I’m stitching), the needle goes down right next to the previous satin stitch. In this way, you can ease your satin stitching around the curve, maintaining the integrity of the satin stitch, but taking the curve without losing that perpendicular angle to the string. You can see that the satin stitches take the curve, but remain looking like satin stitches, even though I “fanned” them out a bit at the top, and they also remain perpendicular to the string padding.

Now, at this stage, you could actually stop and just enjoy a very nice, high-relief, satin stitch line! 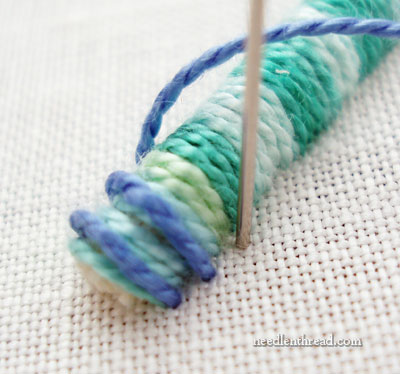 Once the string padding was covered with the satin stitches, I went back to the beginning to stitch the “bars” over which the stem stitch will be worked. I switched to a different color thread here so that you can see it clearly.

Maintaining equal spacing along the string, I’m stitching over the satin stitch layer rather loosely. This layer of stitches should just barely lie on top of the satin stitches. If you pull this layer too tightly, then it will be difficult to do the stem stitch in the next step. Here, you can see the second layer of “bars” over which the stem stitch will be worked. Now for the layer of stem stitch!

At this point, you may wish to switch to a tapestry needle. It will be easier to work the stem stitch with a tapestry needle, which has a blunt tip! But if you don’t have one, don’t fret. You can always work the stem stitch eye first (pushing the eye of the needle under the bar stitches, rather than the point of the needle). This way, you avoid sticking the sharp point of your needle into any of the previous layers of stitching.

Bring your needle up in the fabric, at the center point in front of the rope. Begin working the stem stitch over the bars, going between the “bar” stitches (that’s the blue layer of stitches) and the satin stitches, and be very careful not to pierce any of the threads in either layer. (You can see how the stem stitch worked over “bars” in this article on raised stem stitch.) Work all the way down to the other end of the rope. This is the first line of stem stitch. Now, at this point, you could say you’ve created a pretty interesting line (something akin to a centipede again!), and call it quits! The second line of stem stitch ends in the same hole as the first. Pack your lines of stem stitches close together as you finish each line. Not to make you seasick or anything, but as you stitch over to the other side of the rope, you’re going to feel as if you are stitching upside down. I just put the camera where my hands were working, and this is what it saw! 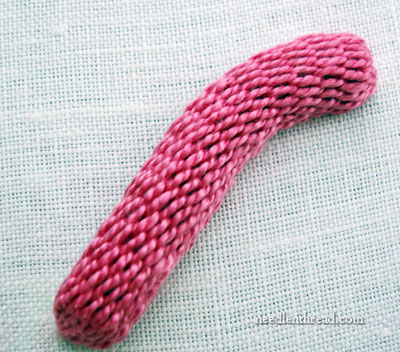 Continue until the whole rope is completely covered. This sample is quite reminiscent of the rare and seldom-seen Kansas Pink Slug. The only thing missing are its notorious googley green eyes… So that is how the raised stem stitch is accomplished in Casalguidi embroidery. You can see along the way many options for different approaches to your own surface embroidery – from the raised satin stitched line, to a satin stitched rope partially covered with stem stitch – to… whatever else your imagination can drum up! Play with it, and see what you can do!

Stitch Play is a new series on Needle ‘n Thread, where we explore different stitches, techniques, and combinations in photo tutorials. If you have a stitch or technique you’d like to see worked out in Stitch Play, feel free to leave a comment below and let me know! I’ll see if I can work something for you!