I haven’t abandoned the Hungarian Redwork Runner – it’s just been a while since I’ve had a chance to pick it up and do much with it!

Now, by a “15-minute project” I don’t really mean it will only take 15 minutes to complete. (If only…!) Instead, I mean it’s a project perfect for 15 minutes here, 15 minutes there. 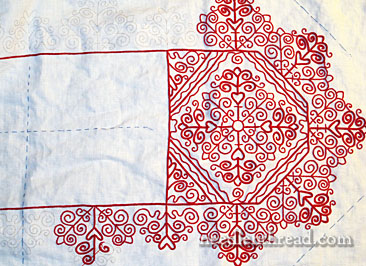 This is also a perfect embroidery project to take along if I’m traveling or if I’ll be stuck waiting somewhere. It’s relatively compact, requires few supplies and no instructions, no hoop, and no extra tools. The whole project fits into a zipper bag, along with a tiny needlebook, a couple skeins of embroidery thread, and a little pair of scissors in a sheath.

Because it’s so easily stowed – simple to take out and put away quickly – it also works well as a 15 Minute project. You can read a little more about my 15 Minute stitching philosophy here, but in a nutshell, it’s the idea that, even if you only have 15 minutes a day – between events or appointments, early in the morning before the rest of the house is up or before you have to leave for work, later in the evening when you just want a few minutes to unwind – if you devote those 15 minutes to your project, you’ll make progress.

Ok, admittedly, it won’t be fast progress, but some progress is better than no progress. And you’d be surprised how 15 minutes here and there adds up on an embroidery project! This entire miniature Cluny tapestry project was worked on that notion. With just little snatches of time, it was – eventually! – finished. When I took the project out again to devote 15 minutes to it the other day, I experienced that little jolt of reality – and disappointment – when I saw that I wasn’t quite as far along as I (inaccurately) remembered.

What do I have left to reach the halfway point? The partially worked motif in the photo above, plus half the motif to the left of it, and … … two and a half completely untouched motifs on the opposite side.

But, some progress is always better than no progress! If I say that to myself over and over again, I’m pretty sure I can convince myself to be satisfied with the slow progress on this cloth!

In the meantime, I’ll start treating it like a carrot. Yes, it’s true, I have a lot of weird approaches – call them mind games, if you will! – to embroidery. And one that works well for motivation is treating embroidery like a carrot. I give it to myself as a reward. “If I get such-n-such done in this amount of time, I will take 15 minutes to work on that.” It works!! Not only do I accomplish the tasks I’m supposed to accomplish but that are not very pleasant (you know, important things – like finishing taxes!), but I also get a little reward at the end.

What about you? Do you play these little motivational games with yourself when working on embroidery projects, or when you have something you really want to do while the things you really have to do are hanging over your head? Do you work on your embroidery in snatches of time? Or are you a Whole Chunk of Time person, who has to work on needlework in large chunks at one time? Have you tried working on certain embroidery projects in short snatches of time, and found that it works, or that it doesn’t work? Do you have a Time Philosophy or a motivational approach, when it comes to your daily tasks and needlework (or anything else, for that matter)? I’d love to hear how others approach time, motivation, and needlework! Any thoughts? Leave your comment below!