The other day, we looked at this fantastic piece of goldwork embroidery by Cristina Badillo. When Cristina sent the piece off to Larissa, who commissioned it, she sent along some samples of the various gold threads in the piece.

Larissa, understanding my inordinate infatuation with goldwork threads, generously shared some cuttings with me, and today, I want to share them with you, virtually.

I like to examine embroidery threads from different countries, especially goldwork threads. Here in the States, most of our goldwork threads come from England and Japan, but there are other goldwork thread manufacturers in other parts of the world, too; looking at these threads may give us a broader perspective on goldwork and may also help those who are interested come up with resources in their own countries or in other countries. This is one of the threads that caught my attention right away. This thread is labeled “Torzal No. 6.” It’s the outlining the leaves and making the tendrils, that I pointed out in Tuesday’s article on goldwork.

To my knowledge, we don’t have a thread like this available in the States. It is a six-ply thread, made up of tiny plies of metal thread similar to passing thread. The six plies are lightly twisted together to make a very smooth, shiny bunch of threads. You can see here a better detail of the thread, with the six plies separated at the end. Notice that the twist is not rope-like, but rather very gently twisted, so that the thread almost looks like liquid gold – it really gleams! Larissa, who sent the thread samples, explained that there is also a 20-ply thread just like this available in Spain. You can see the 20-ply Torzal in the photo above, outlining the broad plate ring in the center of the photo.

This thread fascinates me! It looks like a wonderful thread for adding either delicate (the six-ply) or heavy (the twenty-ply) smooth gold outlines. These threads have the look of twisted purl, or purl s-ing. They are very much like Gimp cord available here, but the wire around the core threads is much finer, and the whole cord is a two-ply cord, rather than a three-ply cord.

I put a #9 crewel needle in the photo there, so that you could get an idea of the thickness of the cords. And now, we get to this. And this is where I fell in love. 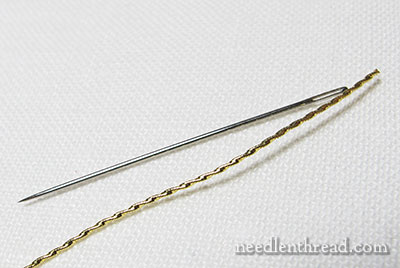 Here’s the thread, lined up with a #9 crewel needle, so you can see the size. Here, you can see three similar threads lined up next to each other. The top thread is check thread #7. It is relatively fine and wavy, but the waviness is not precise or “smooth” – it looks a little rough.

The middle thread is the Spanish thread we’re discussing.

And the thread at the base of the photo is rococco, size “fine” (it doesn’t look too fine next to the others!). Here, you can see a close up of the check thread #7 at the top of the photo, and the Spanish thread in question. When I look at the Spanish thread close up, it reminds me somewhat of flatworm, only it’s somewhat thicker in relation to its width, and it is evenly twisted or crimped. And now, let’s take them apart. This is the check thread #7 that I’ve been using on the Mission Rose project, and that I also used on the Marian Medallion project. The core (the yellow thread there) looks like it is made of a straight cord that has another cord twisted around it. This twist around the straight cord is what gives this particular check thread its wavy peaks and valleys.

The gold wrapped around the core is not wire. It is more like the paper / foil-like gold found on Japanese thread. This is the rococco, coming undone. Notice that the core is made of a thick bunch of many strands of twisted threads, and the strands are all twisted together, and then the flat gold wire is wrapped around the thread. This thick twisted cord makes rococco a less flexible thread.

The gold is wire-like, not paper-like. And here’s the Spanish sample. The core is made up of very fine flat (no twist) threads. The whole bunch of threads (it reminds me of fine flat silk, but I think it’s polyester – I didn’t have a chance to test it to see, but I will later on) is pretty much untwisted. If there is a twist, it’s a very light twist that just follows the twisty crimp in the thread, and when the core is unwrapped, any twist that might be there falls right out flat.

The gold is flat and wire-like, like the gold on the rococco. This thread is much more flexible than the rococco; it pinches well and takes tight, sharp corners.

So there they are – Spanish goldwork threads. I’d love to know who the manufacturer is and if the threads are available outside Spain. Or maybe I just need a really good excuse to take a European vacation?

Ah, me. I’m a sucker for goldwork threads!