As promised, I’m putting together some tambour embroidery instructional resources for those of you who are interested in learning this technique.

Today, we’ll look at three books that are good for instruction in tambour work. These are the three of four books that I’ve found most useful – I’m saving the fourth one for a full review, which I’ll have for you a little later.

In the meantime, though, these three are good. Only one of the three is completely dedicated to tambour work, while the other two have useful chapters on the subject. The three books shown here that instruct at least in part on tambour embroidery are: 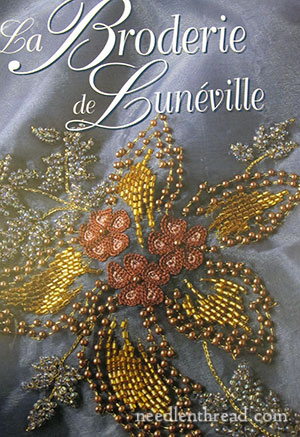 The text is in French, but for those who don’t read French… …the instructional diagrams are very self-explanatory and clear. If you don’t read French, and you really want to know what the text says on the diagrams, you can always type the captions into Google translate – the translations are fairly good. The book also offers several projects – a couple of which are tambour embroidery, the rest of which are beadwork.

It has clear illustrations for working the surface chain stitch with the tambour hook, with easy to understand starts and finishes. These instructions are separate from beadwork instructions, which is nice, because there are subtle differences between the two.

As far as clarity of visual instructions are concerned, this book is my favorite of these three.

You can find La Broderie de Lunéville through Lacis – it’s $28. Occasionally, you can also find it through used book sources or used on Amazon In 18 Century Embroidery Techniques, Gail Marsh devotes a section of the book to tamboured chain stitch, which was a popular method of doing whitework and colored embroidery on household goods and clothing in the 18th century. In this book, the illustrations and explanations of tambour chain stitch are straightforward and clear, though not as detailed as those in Broderie de Lunéville. The diagrams and explanations are definitely clear enough to get started, and she does instruct on beginnings and ends, as well as little things like turning a sharp corner. The instructions are not super detailed, but they are easy to follow and easy to learn from.

The book is widely available, and it is relatively inexpensive. You can find 18th Century Embroidery Techniques new on Amazon for less than $14. Advanced Embroidery Techniques by Beryl Johnson is a little bit deceptive, when it comes to the title – or at least it is, when read here on Needle ‘n Thread. You might be tempted to think it’s all about advanced hand embroidery techniques, like goldwork, dimensional embroidery, and so forth. The cover might lead you to this conclusion, too. Published in the early ’70’s, the book is, in fact, about machine embroidery achieved with primarily two machines: the Cornely and the Singer Irish. But there is a whole chapter at the end of the book devoted to tambour embroidery and beading.

The photos – there are not a lot of them, as the chapter relies more on instructional text than illustrations and photos – are all black and white, but clear. The diagrams are all these little pen drawn diagrams that are also very clear. I’m not super-crazy about her explanations of starts and stops – they work better, I think, for beadwork than for embroidery. What she does do, which few other books go into, is discuss other “stitches” that can be accomplished with the tambour needle. In essence, they’re all chain stitch, but by the movement of the tambour needle, you can modify the look of the chain stitch to mimic other stitches, like buttonhole stitch, satin stitch, and even eyelets (or Algerian eye stitch, with a pulled open hole in the middle).

These are all techniques that were primarily used in tambour embroidery on net, to create tambour lace.

Unfortunately, these “movement” techniques are not illustrated, except with a finished picture of a sampler, and the techniques shown on the sampler are not identified. They are just discussed.

The explanation for working the movements, then, are all written explanations, and it takes reading them step-by-step and sitting with the tambour hook to figure out exactly what she’s telling you to do. It works! But it is not as “easy” as we have become accustomed to, with all our clearly illustrated instructional books of today.

The author goes into detail about other effects that can be achieved with the tambour hook. The illustrations for basic tambour stitching are clear enough, too.

Advanced Embroidery Techniques is only available through used sources, and these days, you’re lucky if you find it for under $50. I was fortunate to get mine at a library used book sale a while ago for 50 cents – so if you have library sales, scour them! Or just check your library to see if they have it or can get it for you.

I know that Lacis also sells the book, but they’re asking $160 for it. If you’re just out to learn tambour work, it’s not worth the high prices, as you can learn basic tambour embroidery through the other books above just as well.

And there you have three books that I think are useful for learning tambour work. If you have 18th Century Embroidery Techniques on your bookshelf already, it’s a good place to start!