Happy Wednesday! We’re halfway through another week, and I thought I’d take the opportunity to share with you some of the embroidery projects underway on my side of the computer screen.

I’m trying to streamline my stitching time and balance it a bit with my computer time, both of which I’m trying to juggle with my “life-sometimes-gets-in-the-way” time. It’s the Best Laid Plans problem, and it is ever thus when it comes to human endeavor. We can plan all we want. But as Robert Burns put it so aptly, The best laid schemes o’ mice an’ men gang aft a-gley. 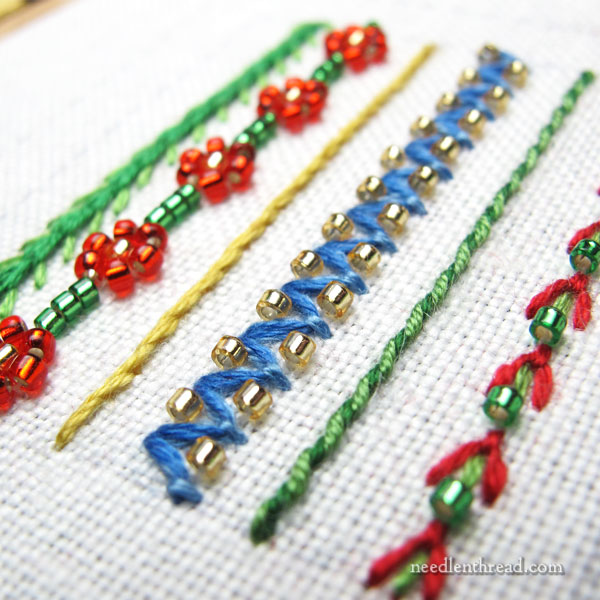 So it’s mid summer, and this embroidery project above is not looking very mid-summery. It’s an idea I’ve had floating around in my head, and I wanted to see if it makes sense to pursue it. So above, you can see a little foray into a test project that may – or may not – develop into anything.

Remember this little stitch sampler needlebook? The project above is somewhat related to it, but, as you can see, beads finagled their way in.

Beads have a way of doing that!

This is a little tiny project – nothing huge – and I’ll reveal it when I’ve got more conclusive evidence that it may work out just as I intend. And if it doesn’t work out, I’ll probably show it to you, anyway, so we can discuss the fail points! I showed you this ecclesiastical test project underway last week. In fact, I’ve made more progress on it than the photo above reveals. I’ve finished the center IHS monogram and more of the quatrefoil frame, and I’ve started some of the ivy.

I’ll get a better photo for you later!

In any case, the conclusion I’m drawing so far is that the piece is working out “ok” in floche. I like it. But I wouldn’t do anything more detailed than this in floche, in such a small space.

I’m debating whether or not to include an accent color of either red or purple with this. Right now, I’ve only got golds and greens on the project, and it could feasibly stay that way. But on the extended arms of the cross, at the very ends, are crowns, and I could work a touch of color in there. Red would stand out best. But I’m afraid it might look like Christmas! You may know that I have A Thing for embroidery projects that are relaxing and that don’t take a whole lot of thought.

Well, this leaf design falls in that category, and I love working on it. I just haven’t had a lot of time to get it finished. Right now, the fun part is toying with how to create sensible color changes in the embroidery stitches in a way that works up relatively quickly and takes little thought or effort.

It seems to be working ok!

When I have time to stitch on this, I’m listening to David Copperfield read by Richard Armitage (on Audible). It’s so good! A perfect escape! And when I don’t want to do something as long-winded as Dickens, I’ve been enjoying the Charles Lennox mysteries (set in Victorian England) by Charles Finch. They’re light and easy.

My only regret on this project is that it isn’t finished. I’m putting together a nice collection of fall variety designs into a ready-to-stitch towel set, and I plan to have those ready for you by the beginning of September so you can get a head start on autumn. I’m sorry to say that I’m all for escaping from this summer as soon as possible! Another exciting happening in the studio – twists upon twists of floche. It’s a long and grueling process and looks more fun than it actually is! But I love the outcome! I like to see the larger hanks of floche broken down into more manageable sized twists. And I love the way the threads softly gleam.

There are other projects underway here, but they’re not photo worthy at this point. Maybe they’ll get there some day soon! In the meantime, I’m plugging away on these three projects with an eye for clearing the decks by the end of September and concentrating on some new ideas.

I hope you’re enjoying some time with your needle and thread lately!