Over the years, I’ve written frequently about my second-favorite embroidery tool: scissors!

My first favorite is the most essential embroidery tool – the needle – but they’re such small things and they don’t require huge investments, so we don’t speak about them in the same reverential tones that we often use when speaking of scissors. 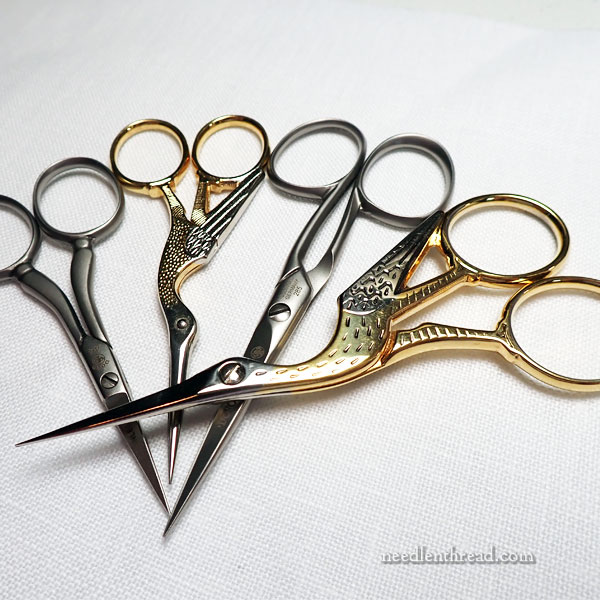 For years, my go-to scissors for embroidery have been DOVO scissors.

DOVO is (was) an excellent brand of scissors out of Solingen in Germany – the same place where Wüsthof knives and other well-known blades are manufactured.

Unfortunately, DOVO has gone into bankruptcy. While some of the scissors are still available here and there, the prices on those that are available have started to climb dramatically. As soon as I saw that the principle of dwindling supply vs increasing demand was kicking in, with prices starting to soar, I figured it was time to bow out of the DOVO fan club.

I love my DOVO scissors, and I will treasure them. But I’m not going to be goaded into increasing the number of DOVO scissors I have, at exorbitant prices, simply because there’s a frenzy to buy what’s left. Instead, since it seems to be inevitable that DOVO scissors are going away for good, I think it’s time to consider what I like about DOVO scissors and where else I can find those features. 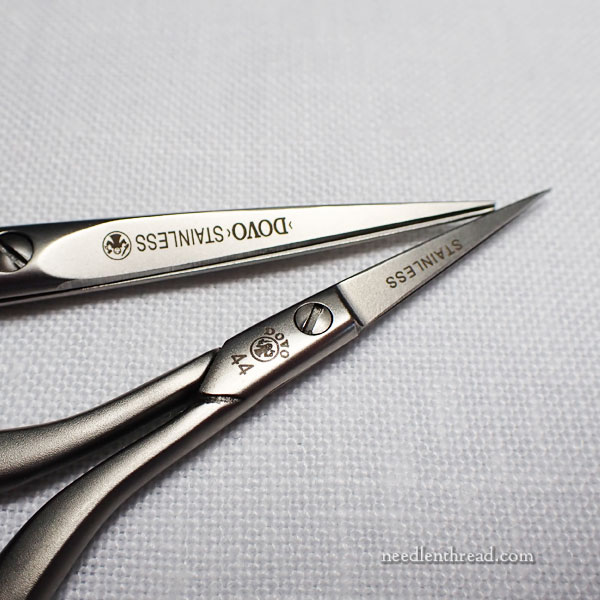 My favorite DOVO scissors are the brushed stainless steel embroidery scissors above. They are comfortable for my fingers, they have sharp blades, and their mechanical works are smooooooth. They don’t catch when they open and close. They don’t wiggle or feel loose.

They have a good all-around feel to them. They are a little weighty, not light or tinny feeling as is often the case with cheap scissors.

So those are the characteristics I’d look for, when hunting out DOVO substitutes. I think the closest scissors I’ve found that substitute well for my favorite DOVOs are these ring-lock embroidery scissors by Premax, from Italy. They’re also quite comfortable in the finger holes.

These are the Premax ring-lock 3.75″ embroidery scissors with straight blades. They also make them with curved blades (I have a pair of each). They look good, they feel great, and they perform well. What more could you want?

I know that many needleworkers go for decorative scissors, and that you might find the scissors mentioned above kind of dull in visual appeal.

When it comes to Premax’s decorative scissors, I’m not a huge fan. They don’t feel as well made or as secure as the ring lock scissors mentioned above. I’m more about function when it comes to scissors – though I’m not opposed to pretty scissors!

I just figure that the whole point of scissors is to function well when it comes to cutting, so that’s the first consideration for me – how well do they actually work? (Not “how good do they actually look?”)

In the States, you can find these Premax scissors available on Amazon at this time. You’ll find them under Embroidery Tools & Accessories on my Amazon Recommendations page here.

This article contains an affiliate link to my Amazon Recommendations page, which means Needle ‘n Thread receives a small commission for purchases made through that link at no extra expense to you. Thanks!