I thought I’d share with you some photos of a piece of ecclesiastical embroidery that was given to me because it is in such a poor state of repair that it can no longer be used. Despite its lack of functionality, it serves as an interesting piece for study and for ideas.

This piece is a processional canopy, once used for outdoor processions. A combination of age, use, storage, and probably some kind of weather damage have all made the canopy unusable for liturgical purposes. The embroidery and the designs on it are nice, though, and it’s a good source of ideas on design and technique. To give you an idea of what the canopy looks like overall, it’s set up here over a large office table. All four of the side panels are embroidered with a round center medallion, which is surrounded by angels and lilies. 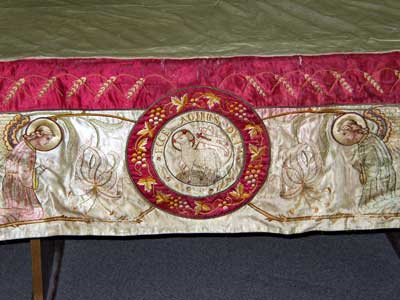 The piece is worked on gold colored silk, and the top edge of each panel is red silk, embroidered with wheat ears. Around each center medallion is a grape motif embroidered in shades of gold. The Agnus Dei in this center piece is rather simple – notice that there’s not a whole lot of shading. It’s more or less an “outline” piece, filled in with appropriate colors to make the overall picture. 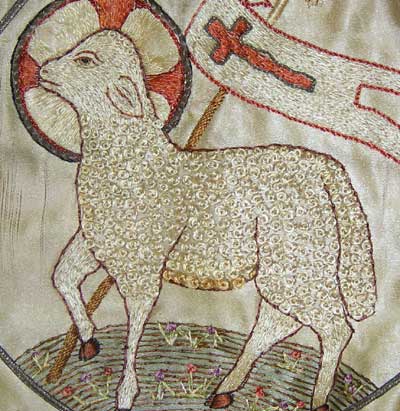 You can see some shading on the hooves and on the bottom of the belly on the lamb, and that’s it. The wool is worked in Chinese knots. This is the green side angel. The colors are very soft. The wings are the boldest part of the angels. Here you can see two signs of deterioration: the obvious deterioration of the fabric, and the lack of stitching in the hands, which are fading away somewhat! The faces of the angels (and the hands) were painted apparently, and then lightly stitched over at the chin line and hair line. The hair is worked in split stitch. On the left side of this panel, the pink angel (with surrounding fabric) is in much better shape. The halo (or “nimbus”) is worked in very long straight stitches, somewhat far apart. The whole halo is lined with two layers of cording, the inside one in a coral color and the outside one much darker in brown. This contrast on the outside of the piece makes the whole image more visible from a distance. One of the lilies on the vine – with a good indication of the poor state of the ground fabric. 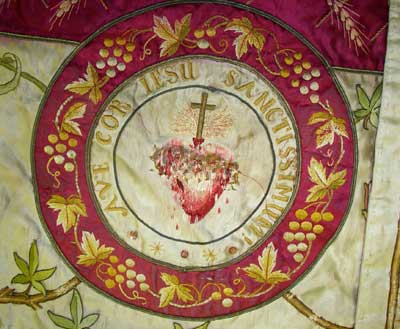 As far as images worked on the piece, this one is in the worst state. The thread is wasted away, and the whole image looks as if it is washing away. The overall shading of the image is very nice, though, with the lighter inside area, rather than seeing it embroidered solidly in red. The lettering around the outside is embroidered in satin stitch. The lilies are not stiff and formal, but rather loosely conceived. They remind me more of the tiger lily than a regular lily, except in their color. The lilies are outlined in a pinkish-coral color, with a very little bit of soft shading in green, and the rest of the inside is worked in white. Each panel is topped with an edge of red silk, on which are embroidered single (large) wheat ears. The wheat is very simply embroidered in satin stitch for the kernels, and long straight stitches for the “hairy” tips. The shaft is couched twisted cord. Each medallion has a “frame” of grapes embroidered in shades of gold. The stitching is worked in satin stitch and a long and short stitch on the leaves that is reminiscent of crewel work. The thread used on the grapes around the medallions, on the wheat at the tops of the panels, and on the lettering around the medallions is all of a heavier stuff than the threads used on the angels and other images. In the close-up on the lily, you can see that the embroidery doesn’t actually fill the shape. Instead, long lines of long split stitches are worked in twisted silk, with spacing enough between the lines to see the ground fabric. The spacing is not there due to disrepair. It’s the way it was embroidered! The stamens on the lilies are satin stitched at the tips of the couched gold cord (which is the same gold cord used on the wheat shafts). This is another one of the four images inside the medallions on each side of the canopy. Note the green leaf at the base of the medallion, on the left. Here’s another one of the same green leaves.

At some point in the canopy’s history – before it was absolutely not usable – someone obviously tried to cover up the deteriorating fabric by adding these little embroidered leaves to the ground fabric, trying to work them into the design as best as they could. They don’t really fit the design, though, as they are too bright. The leaves were probably themselves salvaged from another larger piece of ecclesiastical embroidery!

You can also see, in the lower left of the photo, that a piece of fabric was attached somehow over the original ground silk. I’m familiar with ecclesiastical fabrics available on the market today, and that particular pattern is about the least-expensive, most widely available synthetic church fabric. I don’t know what the person was thinking! But I suppose it was just a desperate attempt to try to keep something that was beautiful in use for as long as possible, before it was time to shelf it completely! *Sigh* And another shot of those leaves….

So, there’s the canopy. I’m glad to have it – it’s given me some good ideas for embroidery, and being able to examine it very closely has given me a little insight into the needlework and assembly techniques used on these types of pieces.

If you have any questions about anything in the pictures, don’t hesitate to ask!