The hemstitch is commonly used in drawn thread work. While adding a decorative edge to a drawn thread area, it bunches together the remaining threads. These bunches of threads can then be further embellished or arranged.

Now, hemstitch is a strange name for the stitch, you might think, but before drawn thread work was done for mere decoration, the hemstitch served a very practical purpose. It… hemmed. By withdrawing one thread from a piece of linen near the edge of the fabric, the sewer could turn up the remaining bit of linen and catch it in the hemstitching, which was pulled slightly to create a small decorative edge above the hem, thus accomplishing the utilitarian aspect of hemming and the decorative aspect of pulled thread. Sometimes, no thread would be withdrawn from the fabric – the hemstitcher would rely on the pull of the hemstitching to create a small pulled thread line just above the hem.

Hemstitch is an easy stitch! Before delving into it with drawn thread work, you need to secure your edges of the drawn thread area, either by re-weaving them or by using satin stitching, and you need to withdraw the horizontal threads from the band. Then, you’re ready to hemstitch.

In the following photos, I’m using #25 coton a broder on 36 count linen, with a size 24 tapestry needle. Begin by bringing your needle up in the fabric two threads down below the last empty line next to your satin stitch band or your re-woven edge. You’re one space over from the edge and two threads down. If you’re grouping two threads together, you’ll take your needle behind the two threads and out again to the front. Pull the thread through… Then take your needle back behind the same two threads (so that your working thread wraps around the two threads), angle the needle down, and bring it up into the fabric two threads down from the edge, positioning the needle for the next stitch. Pull the needle through, and tighten the stitch around the bunch of fabric threads. You can see here that I switched to a photo of four threads being bunched together, to give you a better idea of bunching. If you do not pull the thread firmly, you won’t get nice bunches, which is what you want.

If you are hemstitching around a square, as I was in the last piece where I’m bunching four threads together, when you get to the end of the band, don’t end your thread. Instead, do this: Turn your work over… (the photo above is the back of the work). Take your needle under the satin stitch band that runs horizontal, like the line of hemstitch you just finished… 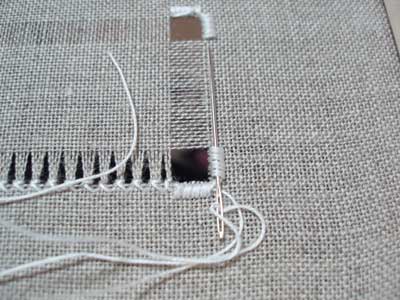 … then up through the next satin stitch edge, which positions you to continue hemstitching along the next side of your square.

And that is the hemstitch. It’s a very simple stitch, don’t you think? There are other variations of hemstitch, actually, but this is the basic hemstitch, most commonly used in this type of embroidery.