The other day, I showed you that magnificent box of M. Heminway & Sons silk – a goodly collection of vintage silks from the turn of the 20th century. The more I think about this treasure, the more excited I am about it! Here, I’d like to show you some of the linens that were in the box…

These linens are certainly “vintage” – they’re downright antiques. Some are embroidered in part, some are not. Some are in fairly good shape and might be salvageable, but some probably can’t be salvaged. Below, you’ll see some photos of only some of the linens, actually – there are more than pictured here, but this is a good selection of the types of linens in the box.

Many of the pieces are of the same weight fabric – a light, fine linen with a smooth “hand” (or surface feel), but others are coarser linen and one even looks like a cotton sateen, the type of fabric used for Mountmellic embroidery. And there are different types of designs on some of the linens – especially on the coarser ones. These, I don’t think, were necessarily used for “Society silk” styled embroidery, but for other projects – maybe just practice?

Let’s take a look – and if you have any insights, do feel free to share them! This is rather a fine weight linen, with a leafy design printed on it. Embroidery was begun on one corner. 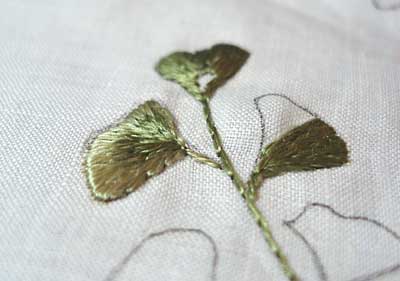 The embroidery for the filled areas is worked in a shading technique – long and short stitch – and the stems are worked in stem stitch. Isn’t the sheen of the silk just beautiful?!? This is a piece of rather coarse linen. You can see that it is pretty well stained and marked with age. I suspect that the embroiderer actually put the pattern on herself, via a prick-and-pounce method of transfer. The pounce must have been either damp or actually an ink of sorts. In old books, especially books on ecclesiastical embroidery, there are some “recipes” for ink that is applied in a way similar to the prick-and-pounce powder method method, and I think that’s what this is. Why do I assume she didn’t buy the piece with the design already on it? Read on, and I’ll get to that point further down… This is another piece of linen that’s relatively coarse, but not as coarse as the linen in the previous photo. The design on this one looks preprinted, and the embroidery was begun in a heavier silk (called “rope” – there’s a good bundle of this silk in the box). The embroiderer was stitching the edges of the leaves in buttonhole stitch. You can see the graduated shades in the stitching here, and the luster of the silk. This piece is from the same set, but instead of flowers, the design around the outside features pomegranates. This is the same design as the first coarse linen up above, and the fabric looks to me more like a cotton sateen – it’s shiny, and the weave looks like a sateen. Hence, my reasoning for thinking she transferred these two designs herself, because they are on completely different types of fabric, and though the designs are the same, they have a few “blotches” in different places. It’s a neat design – it has the look of some of the flowers you’ll find in William Morris’s textile designs. Here’s another piece of fine linen, with a design typical of “Society silk” or Silk Art Embroidery. There’s a larger doily, with several small ones – sort of like coasters. The design is preprinted in blue.

The small circles have different designs around them – they aren’t all exactly the same. I think there were two of one pattern and two of another, but they all “work” together as a matching set. Here’s another set of small doilies. The edges of these could be worked in a buttonhole or a satin stitch, then the rest of the fabric could be cut away.

The strange thing about this set is that it looks as if someone went back over the design with pencil, either to darken it up, or to put in guides for stitching. Either that, or perhaps a ghost image was printed on the fabric at the same time. I’m wondering about spot removal on some of these – I wouldn’t want to remove the design, but I’d like to get rid of some of the spots… This is another pre-printed linen, on a finer weight of linen, but printed in yet a different style when compared to the other linens above.

What I really like about it is the information on the corners – directives for types of stitching and colors, I think. There’s also what looks like a design or pattern number, and a needle still stuck in the fabric. This piece is perhaps my favorite in the whole box – not just because I think the pattern is very pretty, but also because it is in the best shape. I think it IS salvageable, and it would be worth embroidering in the same style, using the silks from the box. I’ve put that on my List!

Some of the pieces had some really pretty embroidery on them, though none of it was finished. Some bits of embroidery look like practice pieces, while others were projects underway but never completed. I’ll show you some of those a bit later, too!

So what do you think? Worth trying to clean some of these up to stitch? Do you think they’d hold up? I certainly think the patterns are worth tracing on many of them, that’s for sure! Some of the designs are very pretty and delicate – others are bold and beautiful. I may have to devote some time to that!