Split stitch is a perfect stitch for hand embroidering lettering and text. In this tutorial, we’ll talk a little bit about threads and take a look at using the split stitch to embroider words. We’ll also look at stitching an isolated French knot.

If you’re just joining in on these hand embroidery tutorials for writing with your needle and thread, you might want to take a look at the index of lessons so far in this series. In previous lessons, I’ve covered subjects such as starting and ending threads, traveling threads on the back of your work so that they are invisible from the front, and combining stitches.

Before venturing into this tutorial, you also might want to check out my split stitch video tutorial, especially if you’re not quite sure of how to do the split stitch. In this tutorial, I’m embroidering the word “jumped” using the split stitch. I’m using cotton floche in a coral color. (I love this color, by the way!)

Floche is a four-ply cotton thread with a very nice shine. It is relatively softly twisted, and it is one single strand – it is not normally strandable. That is, you don’t normally separate floche into smaller strands to stitch with.

If you don’t have floche, try a perle cotton #8, or, if that’s not available, a #5 will also do, but it will be slightly thicker. To split the thread easily, make sure that your straight stitches (before splitting them) are pulled firmly so that they hug against the fabric. If they are loose and bulging up from the fabric, it’s harder to split them in the middle. So in the photos above, you can see that I began at the top of the J using the same method of starting my thread discussed in earlier tutorials. Then I just worked the split stitch straight down the letter. As the tail curved, I didn’t really have to turn my work, because the split stitch doesn’t depend on stitch direction. But if it’s easier for you to turn you work, then by all means, turn it! To end the thread, turn the work over and whip the backstitches that were formed on the back of the fabric, anchoring the thread under these stitches. I’m going to use a French knot to dot the J. To dot the J (it’s lower case), begin in the same manner as discussed in the article on dotting I’s. Stitch three anchoring threads very close together, over only one thread of fabric, stitching each stitch into the stitch before. This will require you to stitch perpendicular stitches. I didn’t do that in the photo above – but it will work better if you do it that way! Turn your fabric over and hitch your working thread under the stitches behind the knot. Then cut your thread. 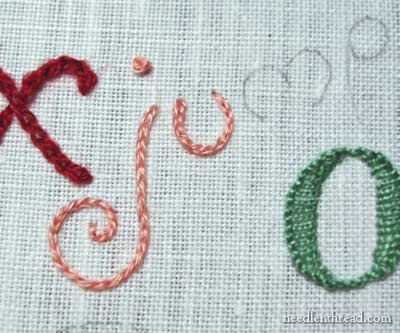 The U is split stitched just like the J. Instead of taking a straight stitch forward, notice that I brought my needle up a stitch length away from where I wanted my line to start, and took a stitch length backwards. Then continue split stitching as normal. Keep your stitches relatively small when working around tight curves. This is the M, finished. Here you have the P and the E finished. Pick a starting point on each letter that makes sense, so that you can follow the flow of the letter easily. With the P, I started at the base and worked up. With the E, I started in the middle of the letter, worked around the loop and down the tail. With the D, I started at the top of the tail and worked down around the loop. And here’s the sampler so far! I still need to add an “S” or two to the text! This word is supposed to be “jumps” rather than “jumped.” That’s what I get for relying on my foggy memories of junior high typing class!

If you’re practicing on text yourself and have a blog, feel free to leave a link so we can check out your progress. Yo
u’re also welcome to post photos in my Needle ‘n Thread group on Flickr, if you like. If you do post any, drop back by and let me know, so I can check them out!

Enjoy the tutorial! If you have any questions or comments, feel free to leave them below!