Have you ever experienced the elation of finishing your embroidery on a project, then suddenly realized that you’re really only half-way finished? That’s the case with the hand embroidered pall I’m working on. When last we visited the project, I was filling in the letters with stem stitch, and I still had quite a way to go on the other little elements in the embroidery. Now, I’ve finished with the embroidery, but I’ve still got the assembly process to face, as well as adding lace to the edge.

Overall, I like the way the embroidered design came out – I hope you do, too! 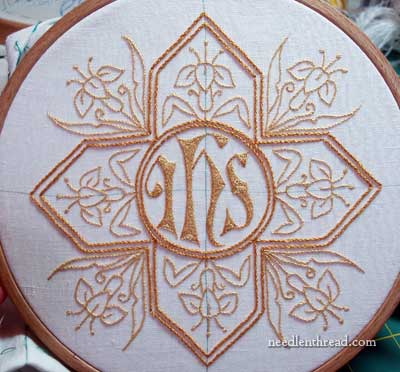 It is certainly not “fancy stitching” here! The whole piece is worked in stem stitch, a stitch that is versatile and pretty, but very easy to work. It is certainly not a “showy” stitch – it’s plain and simple. And sometimes, simple is good. I especially like the contrast between the darker gold, in two strands of Soie d’Alger, and the lighter gold in one strand. It added a little more interest to the finished piece. And I think the stem stitch filling on the letters worked out pretty well, too.

In the photo above, you can see a couple problems. One is the fuzzies on the “H” – I picked out some threads and didn’t clean that up as much as I should have. The camera caught it, which is good, and now that problem is fixed. But there’s another glitch…. it’s on the “S” – do you see it?

On the S, there’s a little irregularity in the middle of the letter. This is where I filled in a different direction. I was hoping to achieve a “nice” diamond shaped filled spot, that was slightly noticeable. Well, it is noticeable, but I don’t like it. I stitched in a different direction, filling in the remaining space between the stem stitched lines. But it made a kind of bump in the middle – or at least, it looks like a bump. The change in direction is noticeable because of the way the light reflects on the thread. Also, there’s a shadow formed at the edge of the diamond shape, where the threads go down into the fabric. This is typical of silk. You can often get a very nice shaded look on the edge of silk stitching (the same thing applies with mercerized cotton, but I don’t think it’s as noticeable), simply by padding the edge to make the edge a bit sharper. The light reflects on the higher stitches, and the edge forms a shadow, giving the overall effect of a slightly darker color at the edge.

And that’s all well and fine – it’s great on the edge. I don’t like the effect in the middle of the letter. But… I decided not to go over it or pick it out. For one thing, I’m out of time. For another, surely it won’t be as noticeable to others as it is to me. Another point: my dad has always said, “Don’t go over it, you’ll make it worse” in any art project or cooking project I’ve ever messed up on. And he’s right! I think picking this out could make it worse.

I once had a “mentor” – a little old nun who did lots of ecclesiastical embroidery – who used to say that I should always have one mistake in my needlework, as it helps keep us humble. Frankly, I always thought that was more of an excuse than anything else. But you know, as much as I balk at the idea of leaving this mistake, she is right in a way. Nothing is perfect. And hand-made items do have flaws.

My goodness. I’m only half-way finished. What if the Humility Mistakes on this item are supposed to come further down the road? Hah!

And that brings me back to the beginning of this article – the embroidery on the pall is only the first part. Now it needs to be constructed, and I need to do the lace on the outside. I’ve set the piece to soaking, and will sew it up later today. The lace on the outside is more difficult than it sounds. Sewing on lace is not, itself, a very difficult task. The lace on a pall, though, is sewn not in the seam, but by hand around the very outside rim of the pall, so that it looks as if it’s in the seam, but it isn’t. There are only three seams around the square, so that’s one reason for this. The other reason is that the lace may need to be removed in the future, for cleaning. If it is sewn into the seams, the whole pall would have to be taken apart. This way, the lace can be taken off and then sewn carefully back on.

So that’s where I am. I’ll show you the whole finished piece before the week is out!