It’s time to overcome, once and for all, the Fear of French Knots – to achieve mastery over this tiny bump of an embroidery stitch, to claim it as your own, so that each French knot you make for the rest of your life is a successful French knot.

So it’s definitely worthwhile to take the time to master the little booger!

If you aren’t perfectly satisfied with your own French knots, here’s a lrefresher course so that you can create perfect French knots with ease. 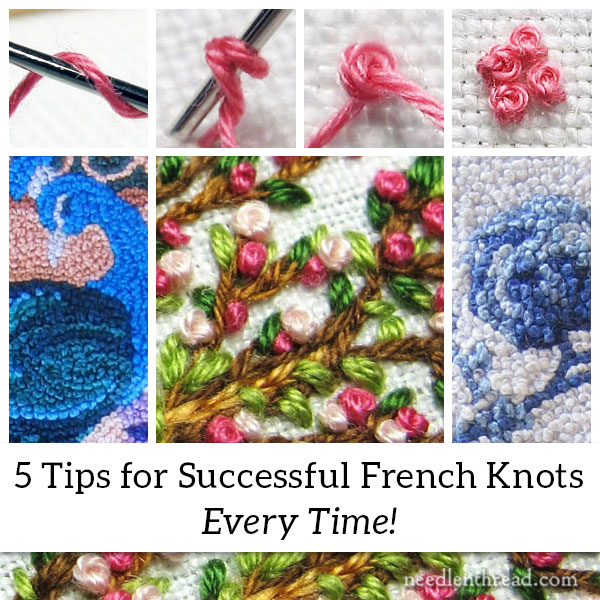 Before we get into the nitty-gritty on French knots, you might check out my how-to video for French knots here. Sometimes, seeing a stitch worked out in video is a good place to start. Once you understand the movement of the stitch, the little nuances that help make the stitch successful are easier to adopt.

Some of the difficulties that you might run into with French knots include the following:

1. The working thread knots up before it’s pulled through the wraps on the French knot. Once the working thread is knotted, it’s hard to get even a simple slip knot out, because of the wraps, so the whole thread has to be cut.

2. The resulting French knot comes out lopsided or loose on the fabric.

3. The whole French knot pulls through to the back of the fabric as you end the stitch.

4. The knot is too small and tight.

If you follow the tips below, you’ll avoid these difficulties and your knots will turn out great! As with any stitch (or pretty much any endeavor!), practice is the key. The more you practice the stitch, the easier it will become and the better the results.

When you set out to make your French knot, consider the number of wraps that you’ll use on the needle. Stitch dictionaries vary on this subject, and pretty much every stitcher ends up sticking with a preferred number of wraps.

In some instructions, you’ll see one wrap, two wraps, or three wraps around the needle.

When I make a French knot, I wrap my working thread around the needle twice. I know many stitchers who prefer three wraps, and that’s ok, too!

But I have seen a lot of examples of flamboyant knots out there, where the creator advises “as many wraps as you want” – using up to four or five, or even more! If you’re going for a sloppy look in your knots – if you want, for example, looseness and irregularity – go for it!

But if you want a nicely balanced, regular, consistently shaped, neat knots, don’t wrap beyond three wraps on the needle. The loops can end up loose, they can snag, and they will definitely end up irregular.

I prefer two wraps. If I want a heavier knot or a tinier knot than the two wraps will produce, I change the weight of my thread.

You might be under the impression, when you make a French, that the needle and thread go to the back of the fabric down the same hole they came out of to start the stitch.

If you go down the same hole, this is where you run into problems with the knot pulling to the back of the fabric.

So instead of taking the needle and thread to the back of the fabric through the same hole, always leave a little space. That space will ensure that your knot sits up on the fabric where it should! In the photo above, I’m holding onto that working thread on the front of the fabric, using a finger or two of the hand that’s holding my hoop.

You want to keep that tension on the thread until the last possible moment, when you only have about an inch or so left to pull through the wraps.

This will ensure two things:

a. that the wraps don’t come undone; and

b. that your thread won’t knot!

While you’re pulling the thread through, pull slowly – especially after you’ve let go of the working thread. Tip #5: The Needle and The Alternate

If you’re going to be working a lot of French knots, consider investing in a range of sizes of milliner (also called “straw”) needles. These needles have a long shaft with an eye that is the same size as the shaft. This helps the needle pull through the wraps more easily.

The milliner needle is used especially for bullion knots, but if you’re working a bunch of French knots, it can come in handy.

You can read more about milliner needles (and other hand embroidery needles) in my article Hand Embroidery Needles: How to Choose Them and Use Them.

There are lots of ways to use French knots in hand embroidery.

They’re probably most often seen as flower centers, as single accenting dots and so forth, because they’re perfect for those situations.

But you can also use them as the key component in a piece of embroidery. For example, in this spring tree above, I used them as the blossoms. They are the flowers, rather than just a little accent on the flower.

And some folks go much farther with French knots. This is an excerpt from a rug Sue embroidered in French knots, using a black and white coloring book page she found online, featuring a glorious peacock. And this one – which melts my little blue-and-while-china-loving-heart – is an excerpt of a French knot masterpiece based on a design from a plate.

I’m pretty sure Sue is a master of the French knot! Aren’t they beautiful?

Don’t give up on the French knot, if you’ve struggled with it in the past. Just a little practice, and you’ll get it! And once you’ve got it, it’s like riding a bike – you won’t forget, and it’s definitely worth it!

If you have any questions, comments or suggestions, feel free to join in the conversation below!

Now go forth and have a little bit of knotty fun this weekend!