I like woven picots! You can do a lot with them!

They can be a lot of things.

Let me show you what I mean. Normally, when making a woven picot, the picot is built around a pin or needle stuck in the fabric.

If you’re not familiar with the woven picot, take a look at this video for making them – you’ll see how it’s done, and how the pin in the fabric plays a central role.

But sometimes – sometimes you want am extra-long, never-ending (so it seems) woven picot, and a regular pin won’t do.

There are different ways to achieve long woven picots. You might be able to finagle a long-ish picot on longer quilting pins. Or you might manage a yet-even-longer woven picot by using a very long doll maker’s needle. You can even work a very long picot by extending the foundation threads beyond the anchored pin – but this drags in the annoying problem of thread snagging while you’re working. It’s starts with a waste knot (A) in a piece of scrap thread. That is, a knot on the end of the thread that holds on the front of the fabric, and that you intend to cut off eventually when you’re finished with it.

Next, it involves a short anchor stitch on the front of the fabric where you want the tip of your picot to be (B).

And finally, it involves some small holding stitches (C) to secure the small anchor stitch.

Nothing too dramatic here. Essentially, we’ve just made a place to anchor our picot at the very tip of the picot, with a thread that we can easily remove when the picot is finished. I’m using the Square-Round hoop that I wrote about here, turned so that the orientation is vertical and long. I’ve got the anchor stitch at the top, and I started my woven picot towards the opposite side of the hoop, well below the anchor stitch.

To achieve a super long woven picot like this, it’s essential that you cut a Very Long piece of thread for the picot.

I’ve unwound about 40 inches of thread from the twist of DMC perle cotton #5 that I’m using. Retrospectively, it should have been about 60″ long. That’s a long piece of thread, and it requires a lot of patience to work with it. It’s very helpful if you have a stand to hold your hoop, rather than working in hand. The whole foundation for the woven picot is configured exactly the same way here as it is when you use a pin or needle to make the stitch, but instead of passing behind the head of the pin, I’m passing through the anchor stitch. 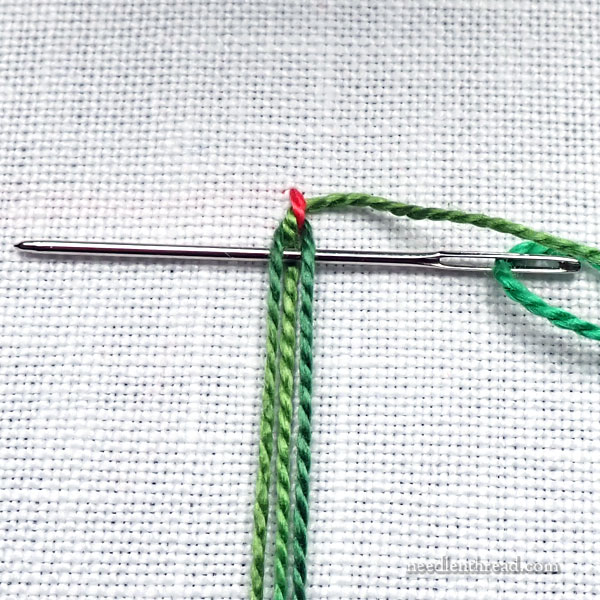 Once the third foundation thread passes through the small anchor stitch, it’s time to start weaving – just like you do with the regular woven picot worked over a pin. It takes a while to weave the woven picot. And as it turns out, 40″ of thread was not nearly enough thread – as you can see – to work an entire 5″ long woven picot.

So I had to shorten this one!

When you’re working with lengths of thread this long, it’s a good idea to work slowly and be very careful with the working thread. You want to avoid annoying knots! You’ll eventually finish your picot, and you’ll then be able to cut the anchor stitch at the top and remove it. The resulting very long woven picot can be bent and twisted, anchored wherever you want to, in order to get the affect you want. I like to twist long woven picots and anchor the edge of the stitch onto the fabric at the folds. It’s a great way to make long, narrow leaves.

So there you have a very long woven picot, achieved by using a simple little anchor stitch instead of a pin.

A little later this week, I’m going to show you something you can do with long woven picots. It’s super fun, so keep an eye out for the next tutorial!

If you’d like to find more stitch tutorials for exploratory stitching, feel free to drop by my Stitch Fun index!