Still continuing with the whitework techniques sampler, I’m messing around a little more with drawn thread embroidery. It’s kind of fun to experiment with the different stitches, and although I’m not 100% pleased with the location of this next little bit of drawn thread work, I still think it’s coming out ok. Today, I want to show you how to do the diamond stitch, which can be used in pulled thread work or drawn thread work.

When used in drawn thread work, the diamond stitch serves to bunch together some of the vertical threads. This is how I’m using it in the motif I’m working on now, anyway. In pulled thread work, you would simply pull the threads together to leave little holes in the fabric. It’s the same concept, but you aren’t working without horizontal threads. Hmmm….. that would be better explained in photos, methinks! First, here’s the area I’m working on. It’s a three-tiered section of drawn threads, and in between each section of drawn threads, I’ve left four horizontal threads intact. I’m still working in multiples of four here. I’m working the diamond stitch at the top of the lower section, over the area where I left four horizontal threads. Now, take your needle down, directly under the point you just emerged, in the drawn thread area, and up again four threads later. 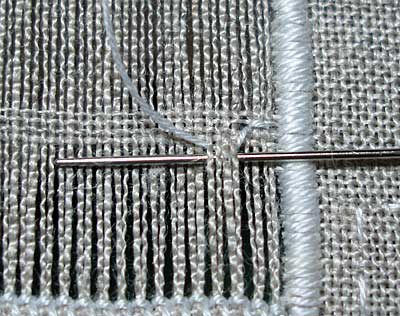 Moving straight up from the point you just emerged, following the vertical threads (so you’re just above them again, in the four-thread area), take your needle down along the same line as the first stitch in the four thread area, and bring it up again four threads later. Now, you’re just going to repeat the stitches. Pull your working thread through, wrap it back around the four threads, and pull the stitch tight. Continue working down the line in this manner, until you have completed the bottom of the diamond design. Now, it’s just a matter of reversing the direction of the stitch and returning along the line, to form the top of the diamonds. Instead of going down into the drawn thread area, you’re just going up into it. The stitches in the four-thread area are all in the same holes (so that there are two stitches over the same four threads on the return journey). Pull tight whenever you’re working the middle stitches, so that you get a nice little pulled effect with little holes in the middle of that four-thread area. This will increase the lacy look of the finished area.

So that’s the diamond stitch. Notice that it bunches together every other group of four threads, and leaves the groups in between straight. That’s ok! For the next step of this section, I’ll work coral knots over the bunches and then through the middle to make a diamond pattern using the drawn threads….

I’ll show you how to do that next time I visit the sampler.

Up later this week – a GIVE-AWAY! Don’t miss the February give-away. I’ll be including some patterns and fibers for you and little fun embellishments. I really need to go through my cabinets and straighten things out again. Whenever I organize, I come up with some pretty good stuff that makes for good stash-building. So stay tuned for that!

Also, I’ve got some reader’s embroidery to show you, a few tutorials, a pattern, and a couple other interesting tidbits from the craft blog-o-sphere. I’m perusing a few books right now, too, so I’d like to review those for you.

Feel free to leave a comment below if you have any questions or input on this technique! Thanks!