It’s been a while since I picked up the Blackwork Fish project, so he’s in a bit of a stall. But I do intend to finish him! (I keep saying that!) Actually, I’m dying to finish him! But I’ve only been able to snatch a few minutes here and there to stitch, and he isn’t the project I have out right now. On the bright side, since the last time I showed him to you, I made a little progress before he got shelved. 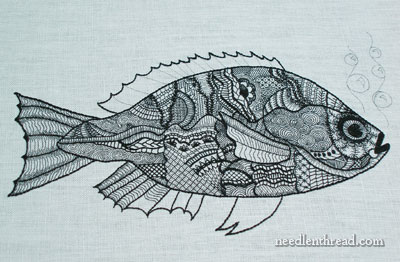 The tail and fins are all getting the same treatment: they’re worked in lines of backstitch, with one of the lighter weights of black silk.

Admittedly, this isn’t my favorite part of the project – I am not a keen lover of repetitive stitching. Still, I like to see the progress, and I know that the only way I’m going to get the fish fin-ished is to just do it! I liked the way the tail worked out. You can see in the fin along the base of the fish that I’ve started the same treatment. I’m planning, though, to lighten up the fins a bit, so I won’t be stitching the fill lines on all the little sections. I’ll start alternating where the “short” lines are placed, in order to leave some blank spaces in the horizontal little bars on the fin. Then I’ll eliminate the short lines altogether, to lighten up the fins a bit more towards the center. Well, that’s the plan – I’ll see how it looks when I get to that point. What I’m really looking forward to is working the bubbles! So I’m leaving them as my “carrot” to get me through the fins!

That’s my status on this project right now. Summer starts for me (officially) this Saturday, so for a couple weeks, I’ll have a bit more time to finish up some projects and start some new ones…. while working up some tutorials for the website, and all kinds of other fun stuff.

I’m also heading out on vacation mid-June, so shortly, I’ll be inviting guest writers for Needle ‘n Thread. If you’re interested in writing about something needlework or textile related for Needle ‘n Thread, I’ll have more details later! But if you stitch and would like to share your work, if you have some tried-and-true tips you’d like to share, a favorite technique you’d like to talk about, or if you write a needlework blog, run a needlework shop, write needlework books, or design needlework products, that’s what I’m looking for! Keep an eye out!