It’s not unusual to be asked to see the back of an embroidery project. I do believe that on just about every project I’ve done here on Needle ‘n Thread, someone has asked at least once to see the back. Working with the Blackwork Fish project, the question of the back of the needlework seems a bit more pertinent, because I’m working with black thread on white fabric. Carrying threads any distance on the back of the fabric would seem a horrific idea, because surely the black thread would show through the front!

That sounds right, but in reality, there are a couple things going on here that prevent the threads showing through the front of the fabric. So this is the back of the fish. (Note that he’s swimming in the other direction!)

True, it’s not the neatest looking back in the world. There are some concentrated globs of decidedly darker areas, where I’ve built up threads a bit more than I probably should have. I could have avoided that by not starting and stopping so often in the same places. 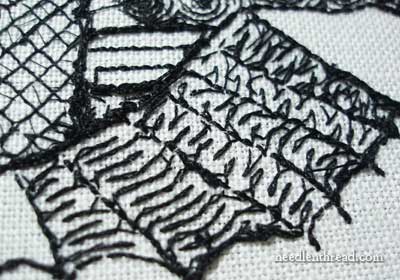 And the fin areas are a bit stripy, just like the fins on the front, though the ones on the back get a bit messy there for a bit.

The threads don’t show through to the front of the fabric – even if I shine a light behind the work, you can’t see any threads being carried from one place to another across the back, and here are the reasons why:

1. I don’t carry threads across long spaces on the back. If I need to move from one area to another, and I don’t want to change threads, I “travel” the thread through stitches that are already on the back of the fabric. (You can get a clearer idea of “traveling” a thread on the back in this hand embroidered lettering tutorial, which deals specifically with the subject.) Basically, “traveling” on the back of the fabric is simply moving from one spot to the next by whipping or lacing the working thread through stitches on the back of the fabric, to get to the next starting point, in such a way that you’re not crossing any open spaces. I wouldn’t do this from one side of the project to the other, but I would do it if I were only moving an inch or two away to start up again.

But that point is pretty much moot. Why? Because there are no open spaces to travel across on this piece, which brings me to point #2:

2. The concentration of stitches in the piece make it practically impossible to see through the fabric. Even though there are some “white spaces” in the design, these are very small – not large enough to see anything through them, because of the concentration of threads on the front and the back.

3. The fabric is a medium weight linen, and most of the black threads are too fine to show through. The three or four heaviest weights of black thread would show through, if there were more white space, but for the majority of the filling, I’ve used the four finest weights of thread in the thread pack (which is made up of 8 weights of black silk). The linen is thick enough to hide the stuff, if one of the finer threads were carried across a white space.