Working the background of the Medallion project in this vermicelli goldwork technique, I don’t actually have to end the goldwork threads too often. I start and stop the thread only once in any given space, always either at a corner of the space, or somewhere along the edge.

When using couched goldwork threads, it’s really very easy to end off the thread. Let me show you how it’s done. 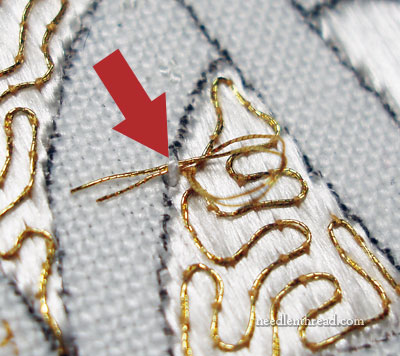 When you arrive at the stopping point for your couched thread (in this case, the gold Elizabethan twist), take your last couching stitch over the goldwork thread right in front of the spot you want to “plunge” the thread to the back of the fabric. Do not end your couching thread yet – you’ll use it to secure the goldwork threads on the back. Clip the metal thread so that there’s about an inch of extra metal thread. This tail will be pulled to the back of the fabric.

I like to use a plunging lasso to sink the ends of goldwork threads and take them to the back of the work. This is just a loop of cotton string in a needle. I’ve already posted a tutorial on how to make a plunging lasso, so if you’re unsure of what it is, feel free to take a look at that tutorial.

In the photo above, the red arrow points to the tip of the loop of the plunging lasso, right before it yanks the tail of gold thread through to the back of the fabric. Then grab your scissors and clip off any remaining gold thread that hasn’t been secured.

That, then, is how you end couched goldwork threads. It really is that simple!

Up later this week on Needle ‘n Thread: a sneak peek at some exciting needlework-related stuff on Needle ‘n Thread for 2012, along with my last book review for 2011, stitchery updates and some thread, a look at a floor stand, and golly, who knows what else?

Don’t forget to take time for your stitching, even if life is a bit hectic – it’ll keep you sane! See you tomorrow!