I’m always looking for solutions to share with you, to make your embroidery life easier.

So when the conversation about a lighted needle threader popped up over in the Needle ‘n Thread Community on Facebook, I found myself exploring a topic that I think could come in handy for those of us who have rotten eyesight for whatever reason – or for those who struggle to thread needles for whatever reason!

One of the gals in the community (thank you, Pamela) posted a picture of a cheap little plastic needle threader that’s lighted, and asked if anyone had tried one. An engaging conversation pursued about different types of needle threading and threaders.

Being somewhat attracted to gadgets, my only take-away was that silly little threader. I have seen lighted needle threaders here and there – I think Dritz, among other companies, makes one – but the reviews are always pretty average or below average. So I never bothered. But this one, for some reason, was different. I had to try one of those little cheap plastic needle threaders! It became a kind of obsession. The thing that sold me was the place where Pamela had come across the needle threaders.

It’s an online store called American Science and Surplus, and they always have weird, curious, overstock-type-things available. It’s not a site I often go to for shopping, unless I’m looking for something that I know they’re likely to carry, and to carry fairly inexpensively.

But I do go there sometimes just to read their zany product descriptions. Whoever writes them must have a lot of fun at work!

In any case, the needle threaders were inexpensive enough – three for $4.95 (unless you buy three – errrrr, that is nine – and then you get them for $4.45 for three).

Of course, there’s the shipping problem. But since I already had a couple things on there scoped out that I was planning on getting, I was ok with paying the shipping. In any case, I bought the needle threader and I gave it the ol’ college try.

I’ve been using it, in fact, for about a week.

I’m always a little wary of thin-wire needle threaders like these, because the thin wire tends to pop off pretty quickly, but this little fellow’s holding up just swell.

The light feature is nice. It does actually work. It lights up the eye of the needle. There’s a little on / off switch for the light, but even when it’s in the on position, the light isn’t always on. You have to squeeze the needle threader as you use it to turn it on. I think this is a good feature, because you can leave the little switch up and not waste the tiny battery hidden somewhere inside that thing.

There’s a cap that goes on the needle threader, too, to protect the wire when you’re not using it. I found the cap a little difficult to remove – I had to give it a serious heave-ho to get it off.

I might have even involved my teeth in the effort at one point. But then I realized it’s a matter of pinching the body of the threader and pulling the cap straight off.

I felt kind of dumb.

On the promotional video for the threaders (you’ll find it on the product listing I linked to above on the American Science and Surplus site) they show someone using the light part of the threader as an emergency flashlight while rummaging through the recesses of a purse in a dark room.

That might be going a bit overboard. The light on this thing does give off a tiny LED glow, but it’s not emergency lighting by a long shot, and I don’t see it working all that well for digging in the cavernous recesses of a purse while in a dark room (it looks hilariously questionable in that video – who are they marketing to, I wonder?)

They also show the charming little plastic threader attached via its cheap little carabiner to the zipper of a jacket – because, well – you know. Everyone wearing a jacket wants a cheap plastic LED needle threader hanging from its zipper. It’s a real statement of utilitarian fashion.

And you know what? I like it. It works well, and it works with fine needles. I don’t know how long it’s going to work well, but for what it is and the price I paid for it, I like it.

If you need something else from American Science and Surplus and you want to try the needle threader out, I’d just get them from there. The shipping makes them too expensive to buy alone, though, I think. It was $7-something to my house, but I had a few other things on my list from there, which all fell under that $7-something postage, making it more affordable.

If you look for the threaders on Amazon, they run $6 or $7 each, which is insane because they really are cheap little things.

I figure for the price of three on American Science and Surplus, I can have one for my work station, one to throw in a project bag, and one to hang on my jacket zipper so that I can go about stylin’ a needle threader, like the true fashionista that I am. During our conversation on the Facebook group, the subject of threaders for those who make flies for fishing came up. I do have one of those – the top of it is pictured in the photo above on the right.

I don’t know if they come in other gauges of wire. I’m assuming they must, because this is such a heavy gauge that it makes the threader useless for any fine needles. It works ok on, say, a #22 (or even a #24) tapestry or chenille needle. It works ok on about a #5 crewel.

But I’ve found that, if I force it into a finer needle, it just shreds my threads to kingdom-come by the time I get them through the eye.

With needles that size, for me, the whole point of a threader is… pointless.

Part of the problem is that little cross-over on the tip. When you’re using cotton threads, threaders that cross over like that are not your best friend. As you pull the threader through the needle’s eye, especially if the needle is tight, the thread is forced down into that crossed part at the tip, where real havoc can happen. I always find that those crossed tip threaders chew up my threads.

That said, I’m going to look for finer gauge fly fishing threaders, because they are well made. If I ever find one that works on smaller needles, I’ll let you know!

Other Needle Threaders for Fine Needles

A while ago, I reviewed this micro needle threader from Puffin. I still like it! And I don’t hesitate to recommend it to those looking for small needle threaders. 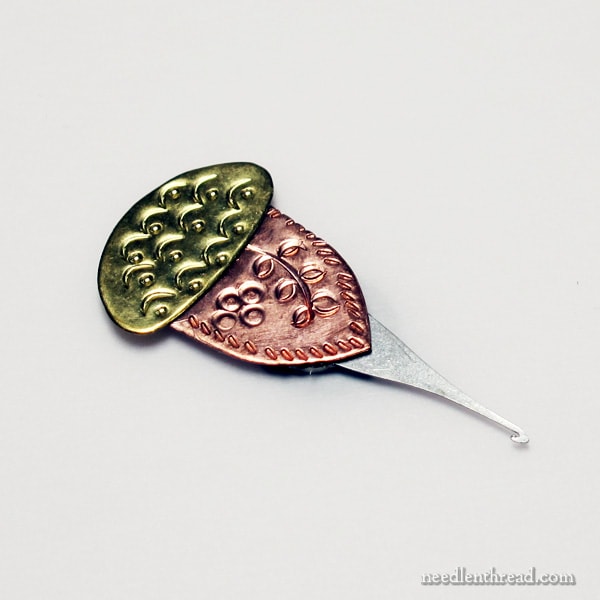 I like the fact that it isn’t a wire threader.

There’s still the question of the little burr on the end of the hook (addressed in the article). I’ve heard from several people who have experienced that with these particular micro threaders. I buffed mine out, and it’s fine.

If you have a favorite needle threader that works just great for you, why not chime in below and tell us about it? Your recommendation may be just the thing that keeps someone else out there happily stitching! Feel free to chime in on the conversation below!