Before Easter, I was playing around with the idea of embroidered Easter eggs. Thing about it – spring colors, Easter egg decorations – a great combination for fun embroidery (and something I thought the kids would like!) Because of time constraints, I didn’t get very far, but I thought I’d show you what I threw together and how easy it can be to stitch on a stuffed anything.

The Easter egg – which actually looked more like a football at first – is made out of some wool remnants I had lying around. I cut out four marquis-shaped sections, using two colors. Taking one of each color, I sewed them together, right sides facing, then I did the same with the remaining two colors, then placed the two sewn together pieces right sides facing, and sewed those together, leaving a little turning hole in the last seam. All this was done by hand – it would go a lot faster by machine and would look a heck of a lot better! Anyway, this was just an experiment.

Next time, by the way, I’ll use six sections and hopefully the finished product won’t remind me of a kid’s stuffed football! This is the egg, with a few layers of embroidery worked on it. Next time (next year?) I’ll work a few more rows and do something more elaborate with the tips. The possibilities are really endless as far as the embroidery goes – you could get really elaborate with something like this! Beads, ribbon, a variety of stitches… Embroidering on a stuffed figure is pretty easy, actually. You begin with a knot in the end of your thread, take the needle in some distance away from where you intend to start… …wiggle the needle around a bit in the filling, then pull the thread through, so that the knot catches inside the filling and secures the thread. Work your stitches in a “sewing” method – that is, taking the needle in and out of the piece in one swoop – and then, when you get to the end of your stitching, anchor the end of the stitch as you normally would…. …bringing the needle either out in a seam, or out underneath a stitched area… …and take a small securing backstitch, to anchor the thread. It’s best if this can be done in a seam, where the backstitch can’t be seen, or, again, inside some stitched area where it will be hidden. See! It’s gone. Wow. Those seams are really ugly. A sewing machine will eliminate that messy look, I think! 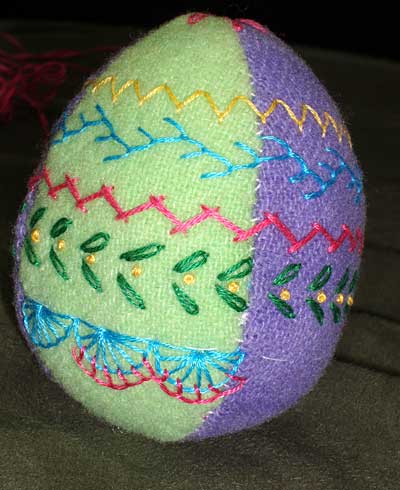 You can see here a view of the egg on a “corner.” To ensure relatively straight paths along which to embroider, I first used regular white thread and basted a running stitch line around the egg. Once the line was embroidered, I cut the white thread and pulled it out. You could probably even use something like a fabric masking tape to mark the line and then baste, to get a really straight line.

I’m pretty sure I’ll do this again, but next time, I’ll make a pattern for a six-panel egg, and I’ll use a machine to sew up the seams. I suppose any fabric would work – wool felt would probably work great!

Another option would be silks and brocades and fancy fabrics, for a dressier look. And, of course, you’re not limited to egg-shapes. You could do spheres… think Christmas ornaments and so forth. I’m contemplating a similar project for my kids’ embroidery classes this year.

So that was my stuffed egg adventure. I love the colors! But now that Easter is over, I think I’ll move on to other needle ‘n thread adventures!