To all who offered sound advice on my stitching dilemma mentioned yesterday, many thanks!

I spent yesterday afternoon and early evening fiddling, and this is what I did. Not 100% sure of part of it, but let’s chat it up, anyway! And then I’ll show you what’s next in this grand adventure. 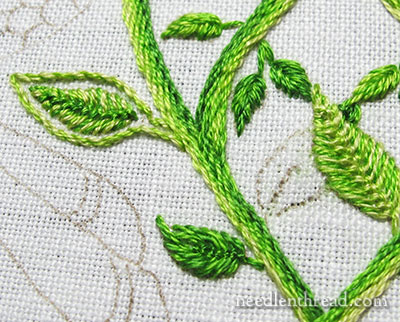 Here’s the background leaf, removed. I didn’t remove the tip, because it’s fine. It’s just some straight stitches in the dark green.

At this point, I hadn’t picked out the outline around the leaf on the side, but I did shortly after I took this photo.

Strangely enough, I was so engrossed in The Fix, that after this photo, I forgot to take any other photos along the way. When I unloaded my camera last night, I surprised myself with one photo, which is really weird, since I usually take 100 or more photos in two or three hours of stitching.

To remedy the situation, I made my way out to the work room in the wee hours to snap some “finish” shots. And that was no mean feat! I was in my PJs, the wind was howling something fierce, and the temperature – which was a balmy 70 earlier in the day – had dropped some 35 degrees. Bechilled, fingers blue, I made my way through the night to my abandoned cave where I do most of my work, flooded the place with lights, and took photos.

I just hope the neighbors weren’t peering through the windows…

But, back to The Fix! I think the lower leaf looks better. It’s worked in fishbone stitch, with two strands of the medium-dark green.

The outlines, I worked in one strand of floss using a medium-dark green, in a tiny stem stitch. I like them better, but I’m still not sure I like them.

They are outlines. And outlines are supposed to be visible. And I like the outlines on the different leafy elements in the design. My plan at this point is to leave them and see how they look in context, when more of the design is finished. They’re no big deal to snip out and re-stitch.

When cropping a photo or taking a close-up so you can see the detail of the stitched elements, we lose the whole context of the piece. These leaves, for example, look relatively large, but in the scheme of the piece, this area is not large and the leaves are small – the largest being no longer than half an inch.

Speaking of large leaves, this is what we’re going to chat about next: The Large Leaves at the base of the design.

This was the plan I had planned not to plan. I really hadn’t planned on using long & short stitch shading on this version of the project. But (there’s always a but) the fact is, I did. And I’ll tell you why and give you some detailed stitching tips when next we visit the project.

It is a much more forgiving technique than people initially realize. And it does tend to add a certain Wow Factor to surface embroidery projects. It’s definitely a technique worth learning. To that end, I have a series of long & short stitch shading lessons here on Needle ‘n Thread, and you’re welcome to take a look at those to glean some tips for this type of shading.