Last week, I reviewed the book BiblioCraft, wherein you’ll find a project I designed, inspired by ornamental penmanship of the 19th century.

The project in the book is worked on a linen glass towel (like the one I used for this monogrammed towel). The one in the book was my second version of the project, though.

The first version of the project was worked in various types of silk thread, and it ended up looking like this:

I used three Au Ver a Soie silks: Soie d’Alger (makes a great satin stitch), Soie de Paris (the blues in the project), and Soie Perlee, along with a little bit of Trebizond.

While I was working on the silk version, I had a nagging feeling that it didn’t “fit” the concept of the book very well. So I set up the redwork version on the linen towel to go along with it. 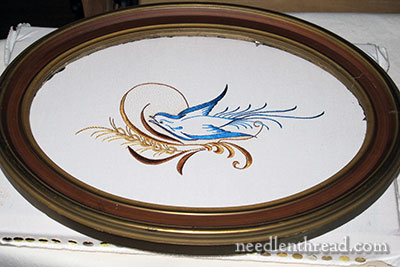 I also discovered the Problem of the Antique Frame.

Finding a frame for the bird was not easy. I wanted something that looked antique – that reflected the origins of the design in an era when ornamental penmanship flourished. I found an antique oval frame with domed glass through an antique shop, the idea of which suited the project really well.

The dimensions seemed right, but in fact, once I put the frame over the embroidery, they weren’t right. The frame was slightly too big.

So I cut an oval mat in gold, matching the gold trim on the frame, to fit just inside the frame and bring it in a little closer to the embroidery.

With antique frames, cutting an oval mat from “automatic oval sizes” available today is useless. Old frames were not necessarily made with absolute computer precision.

Another problem I ran into with the antique frame was incessant crumbling. While the front looked ok – just a little antique-ish and worn, but still solid – the wood behind crumbled. Little bits of crumble, here and there, constantly fell from the frame, peppering the fabric and embroidery.

So I learned a valuable lesson (at the zero hour, no less). Skip the antique frame, unless you know for certain what it will do for you.

Incidentally, since then, I’ve discovered several sources for new frames with domed (or bubble) glass, which I think is an interesting option for framing embroidery. Eventually, I’ll reframe the silk version of the penmanship bird in a new frame.

As it turned out, the redwork version was chosen for the book, as I figured it would be – it is less complicated and fits the nature of the book better.

So that was the tale of the Penmanship Bird Project! It was a good learning experience for me.

But then, just about every project turns out to be a good learning experience in some way, don’t you think?