Moving on to the next word in the hand embroidered lettering series, today’s tutorial concentrates on a satin stitched initial letter, with the rest of the word worked in chain stitch. After all, who says the whole word has to be embroidered with the same stitches?!

I’ll be working with wool thread in this tutorial, embroidering the word “Fox.” If you’re a beginner at hand embroidery, you may wish to check out two videos: padded satin stitch and chain stitch. If you’re just joining in on these tutorials, I’ve got an up-to-date index of all the hand embroidered lettering tutorials, if you want to check out some of the previous concepts covered. For this tutorial, I’m using Simply Wool from Gentle Art, Inc. This is a fine wool embroidery thread, and I really liked working with it. It’s a beautiful color of red, first of all, and secondly, the wool itself is slightly finer and softer than Appleton, while still retaining the typical look and feel of wool thread. If they had a broader color range (they only offer about 36 colors right now) and if it weren’t quite so expensive, it would be my wool of choice. Compared to Appleton, though, it’s really expensive – between $3-$3.50, depending on where you buy it, for 10 yards. (Appleton’s about $1.30 for 27 yards, and they offer 421 shades right now). You can see I ended up with 3 filling lines between the two outside lines, and again, those inside filling lines are made up of a few long split stitches. That’s the padding – now it’s time to start the satin stitching. I’m working the satin stitch horizontal over the padded bar. On a shape like this, you can also stitch your satin stitch on a diagonal, but I used the horizontal on purpose. When you begin the satin stitch, don’t begin right on the edge of the bar. Begin around half-way up the bar, and then stitch to one end. Then go back to your starting point and stitch to the other end. The arrows in both pictures above demonstrate this idea of starting in the middle and working to each end. For the small bar on the F, I worked two long straight stitches side by side over the drawn line. They were obviously thicker than the drawn line, but that’s ok. I’m going to satin stitch over these straight stitches, in a manner similar to what is called “trailing.” Trailing is basically an overcast stitch (like a small satin stitch) worked over a long thread or group of threads used for padding. With this little bar on the F, I stitched one straight stitch out from the spine of the F to the end of the little bar, then went back to the spine and stitched another straight stitch right next to the first. Then, starting at the end of the bar – not next to the spine – I worked the overcast stitch over the bar. An overcast stitch is technically the same concept as a satin stitch, but, again, much smaller. I think it’s called overcast, because it is just going “over and over.” In some old books, you see it called “over and over stitch.” For the longer bar at the top of the F, I did the same exact thing – worked two long straight stitches side-by-side, and then worked the overcast stitch over them, beginning from the outside edge and working towards the spine of the F. When I finished overcasting the top bar, this is what it looked like. So I just added two more satin stitches at the top of the spine, to get it to look like this. There’s the completed F. It’s nice and bold, and I really like the color! For the other two letter – O and X – I’m using chain stitch. I began the thread on the O in the same manner discussed in the previous lettering tutorials, so that I started stitching the chain stitch at the top of the O. 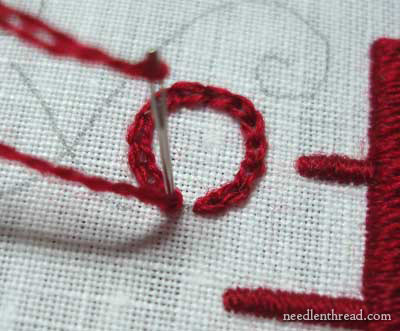 I’ve arrived here back at the top of the O, where it is practically time
to end the thread. I have room for one more stitch here. And there you have the F and the O. I chain stitched the small bar of the X first. Then, turning my work over, I worked the thread under the stitches already there, to the cross on the X, as indicated by the red large arrow. Then I brought my needle up to the front of the work and took some tiny “stepping” stitches over to where I wanted to begin the chain stitch on larger cross of the X. These stitches are indicated by the smaller red arrows. The purpose here is to keep my thread from traveling across the back of the work where it might be seen from the front. This keeps the back of the work nice and tidy. 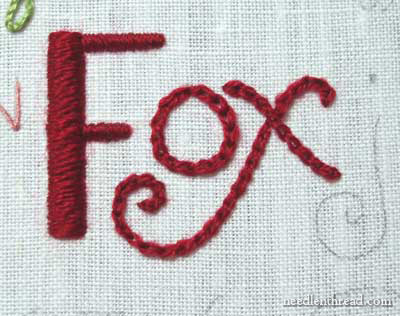 And that is FOX. And here is the sampler so far!