Here’s a little update on my current miniature stitchery project, a mini rendition of the “Sense of Hearing” Lady & Unicorn tapestry found in the Cluny museum in Paris.

When I set this project up at the beginning of this semester of school, my intention was to keep it on hand for those brief moments throughout the day when I could do a bit of stitching, but not a whole lot. That way, I’d have something to stitch on during busy times, and I’d be making progress on a project even if I couldn’t devote hours at a time to needlework. A little project like this one serves as motivation for me – if I do what I need to do throughout the day (and do it efficiently), then the reward is an extra few moments to stitch here and there. I like rewards like that!

So, over the past four months, approaching the project in bits and pieces, it’s come along quite far. The finish line is still far away, but at least at this point, it’s visible! 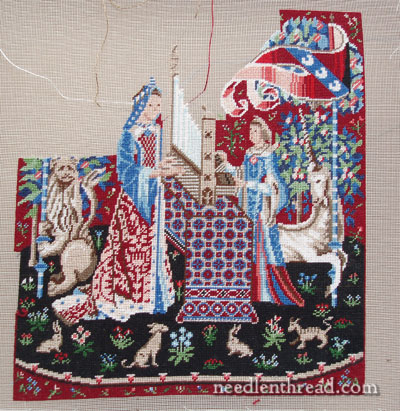 And look what’s happened! The Lady finally showed up! This part was a little fiddly to stitch – lots of color changes in little bits, which slows down progress – and I’m also having to compensate in here for the counting error I made right at the beginning of the project. This is where the mistake shows up. The organ pipes will show up a bit better, once the background is in. Notice the eyes on the two gals. On the Lady (the larger figure on the left), I decided to use a full cross stitch for the eyes, because the half cross stitch left little slanted slits that looked a bit odd. In fact, in the instructions, it might say something about using a full cross stitch – I don’t remember. But it seemed a pretty good choice, and I definitely like her tiny eyes better than I do the handmaid’s (on the right side). I may go back to the little gal on the right and cross her eyes for her, too.

Here’s the problem spot. When I first started on this piece, I made a three stitch counting error on the left side of the very base of the organ, in the space between the organ base and the lady’s dress. The only place this is really going to be noticeable (besides the left edge of the piece, which I’ve already taken care of) is right here, where the Lady meets the Organ. Technically, she’s supposed to be butted up against the organ there, so that the organ cuts off her left side. I think once the background’s in, she’ll look ok. I was going to sketch her out in blue – just a little bulge where her left arm would be, but in fact, it looks bizarre, no matter how I try to map that out, because of the way she’s turned. So I’ve decided to go on ahead with her as she is, and just stitch in some background there. Next time, you’ll see if I’ve made a good decision or a bad one, I suppose!

If you’d like more information on this project, or you’d like to see the progress of it, you can check out the following links:

I’d like to tie up a few loose ends this week – on the website and in my projects – and see if I can finish this piece (might be a bit of a stretch! A big bit of a stretch!) and also finish the Modern Jacobean embroidery project by Tanja Berlin that I’ve got going. Possible? Hm. We’ll see. In addition, I’m working on some website projects, trying to clean up some loose threads on the site, and hopefully get everything here situated for the last long haul of the school year. Well, it’s always nice to see the light at the end of the tunnel – whether it’s with an embroidery project or with an academic year!

Well, I’m off to spend time with my needle & thread – I hope you’re getting lots of pleasure out of yours these days, too!